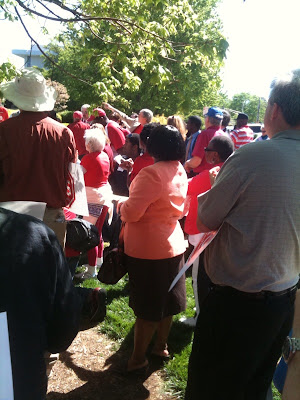 Part of the crowd on West Jones Street yesterday in Raleigh protesting at the General Assembly the Republican majority's plan to suppress votes through a new voter photo ID law.

Speakers included two college students who talked about the disproportionate impact on young voters whose existing photo IDs will probably not have their college addresses. Senior citizens who've given up their driving privileges and who do not have birth certificates spoke, along with a representative of the American Assoc. of Retired Persons. A homeless veteran spoke against the law, along with representatives of North Carolina Fair Share. Chris Kromm of the Institute of Southern Studies spoke as did several members of the General Assembly. Rep. Alma Adams asked rhetorically, "If you look like me, do you need a voter ID? Hell no!"

Rep. Larry Hall, one of the leaders of the opposition in the General Assembly, summed up the conclusion of many of the speakers ... that the supposed "need" for this proposed law only emerged after the Republicans took control of the General Assembly. "They want us to be stuck with them forever," Rep. Hall said, and the way to do that is to suppress the votes of groups not naturally aligned with the extreme conservative views of those now running the General Assembly.

Rev. William Barber of the NC NAACP thundered for all of us: "Tell it like it is! This is a voter-suppression, voter-intimidation law. But we won't go back! Too many have cried, too many have died for the right to vote!"
Posted by J.W. Williamson at 4/14/2011 09:20:00 AM
Email ThisBlogThis!Share to TwitterShare to FacebookShare to Pinterest
Labels: voter suppression, voting rights

Go to Madison County NC for an election cycle and you will believe in Voter ID.

38 cases of alledged voter fraud, zero convictions...go figure. Let' call it what it is, voter suppression.