Aide to Jonathan Jordan Did It 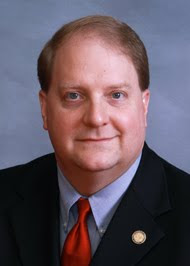 An unsigned "poison pen" letter with nasty racist overtones was surreptitiously placed on the desks of NC Senate members on the day they were to vote on an otherwise non-controversial act to symbolically pardon Gov. William Woods Holden for his 1870 impeachment.

Holden was a Republican who called out the militia to put down Ku Klux Klan thuggery. He was impeached by a Democratic General Assembly as a n****er-lover, the first governor ever removed from office in the United States.

The act this year to pardon him, albeit symbolically, would have been a line-drive hit for the new Republican majority in the General Assembly, finally doing the right thing for one of their own party who was unfairly and maliciously driven from office by backward, racist Democrats.

Then the unsigned letter appeared on Senate members desks quoting an un-reconstructed pro-slavery UNC history professor, from almost a century ago, who accused Gov. Holden of "corruption." Spooked, the Republican leadership in the Senate immediately suspended action on the bill.

NC Senate rules forbid unsigned pieces of paper that advocate for or against legislative action. Mysteriously, the several thousand cameras in the Senate chamber weren't working the morning the letters were distributed. No one in the Senate claimed responsibility.

Apparently, it was WRAL's Laura Leslie that got the scoop, tweeting yesterday afternoon that the culprit was a 27-year-old legislative assistant to NC House member Jonathan Jordan, one Carlton Huffman, who is now unemployed at the General Assembly. Rep. Jordan, for his part, is playing Sergeant Schultz: "I know nuth-think!"

The Progressive Pulse's Sarah Ovaska got hold of Mr. Huffman and interviewed him. According to Huffman, his only concern was "corruption." White racial superiority? Never crossed his mind.

During 2009 Carlton Huffman had a blog page on ConservativeNC, where he paraded his hard-right cred for that particular crowd (sample: "This is no time to listen to Colin Powell and the voices of moderation in our party"). He's been featured as a guest blogger on Katy's Conservative Corner, where Katy offered this bio of him:

Originally from Granite Falls, North Carolina, Carlton Huffman is a conservative activist who recently relocated to Raleigh from the Northern Virginia area. He’s happy be back in the land of Jesse Helms. He graduated from Campbell University where he studied Government and History.

He's also a former assistant to Pat Buchanan. He wrote on a slavery revisionism site for Confederate History Month that the Old South (Massa on the plantation, blacks in their subservient place) was the closest to a "second Eden" that Americans had ever come.

While Jonathan Jordan was not saying why Huffman was no longer in his employ, he did volunteer that Huffman was "an excellent legislative assistant." Right! It's not every employee on the House side of the General Assembly who'll take the initiative to cross over to the Senate side to pass out anonymously materials meant to slime a 19th-century opponent of the Ku Klux Klan.
Posted by J.W. Williamson at 4/06/2011 08:19:00 AM
Email ThisBlogThis!Share to TwitterShare to FacebookShare to Pinterest
Labels: Carlton Huffman, Jonathan Jordan, Laura Leslie, racism

Good timing, this, on the same day that Republicans in the Gen'l Assembly (House) want to nullify the Racial Justice Act. http://www.charlotteobserver.com/2011/04/06/2200601/bill-regulates-nc-racial-bias.html

Where did the old racists in the Democratic Party go? They went to the GOP, every one.

No, the Democrats still are racists. They merely hate heterosexual Caucasians now.

What sarcasm? Your posts seem to indicate this is a true statement.

"Oh yes, as a Democratic heterosexual Caucasian Christian I obviously hate myself."

It takes so much less energy to love rather than to hate. Of course, this means nothing to idiots. Anyone who voted for these "Jordan type" clowns should be so ashamed. It's very much like pissing on our national flag and constitution. Just because hate is like a hard on. Oh, it feels so good, but rapidly disappears, and what can bring it back? Well we can hate some more....kinda like heroin.

"idiots", "Anyone who voted for these Jordan type clowns", pissing on our flag...."

Just because hate is like a hard on. Oh, it feels so good, but rapidly disappears, and what can bring it back? Well we can hate some more....kinda like heroin.


This is the best explanation I've heard of the energy behind the last thirty years of Republican power, as the misery level of most American nose dived similar to the quality of life for a drug addict.

We have too much hate addiction in America, thanks to Fox, Rush, Beck, Newsmax and a bunch of billionaire funders who push hate much like heroin.

Henerietta, do you honestly think that because many Democrats want everyone in this country to have a chance, and don't think homosexuality should be demonized, that means they hate "heterosexual Caucasians"?

Maybe in your world things are black and white and to love one you must hate another, but thankfully not everyone lives that way.

to (whatever Anonymous): telling the truth is not "hate" or "kettles." The truth is that GREED is destroying our wonderful nation. Do you have the capacity to study the numbers? The only way you can get lower or middle SES Americans to support the party of greed is to lie and create hatred of OUR national interest by LYING!! As pointed out by the President during his campaign all the greedy traitors have to do is to appeal to guns and religion and scare the hell out of the "regular" folks. The best way to do this is by creating hatred. You make them hate a "FAIR DEAL" for 90% of Americans. You make them despise those who aren't white (whatever that is-a rapidly disappearing majority, if you can read) or rich, rich, rich. I don't hate these people: I pity them-the false leaders and the pathetic followers. I think almost all of our "political leaders" are bought and paid for-but, let's look at who do most of the buying-those who's prosperity is solidified by paying for HATE. If they can get "ordinary Joe" (me?) to hate hard enough they can create enough amnesia to ignore their wholesale theft to get 100% of the national wealth.

" If they can get "ordinary Joe" (me?) to hate hard enough they can create enough amnesia to ignore their wholesale theft to get 100% of the national wealth."

You have a fan here, please keep posting!

No, I think liberals are racists homophobes because of what I read on this blog.

"It takes so much less energy to love rather than to hate. Of course, this means nothing to idiots." - retired educator


"you use your tongue prettier than a twenty dollar whore." - Taggart (Blazing Saddles)