Is Cheri Beasley Now the Frontrunner?

News broke while I was traveling on Thursday that former NC Supreme Court Chief Justice Cheri Beasley is expected to announce her candidacy for the US Senate, sometime before the daffodils wither.“She’s putting a team together, is planning to announce and I think we’ll see that in early April,” said Kara Hollingsworth, a Cary-based political consultant who has worked on previous Beasley campaigns and remains close with Beasley. (Brian Murphy)
The thing is: Beasley has run statewide and came within 400 votes of winning against Rumpelstiltskin last November, so she could easily have multiples of the base that Jeff Jackson of Mecklenberg County currently has.
I've been a big fan of Senator Jackson since the first time he stood up in the NC Senate and indicted the Republican bosses for malfeasance and bad faith. (Here's just one YouTube from Jan. 2015 of his communication skills.) Plus I owe him for helping rally support in Watauga during the last off-year, in 2019, when he came to our fall rally. We knew what our collective goals would be in 2020, and Jeff helped us focus and build our reserves. 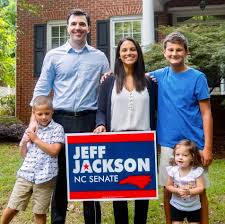 I had wanted Jackson to run against Tillis in 2020. A lot of people wanted that. But Cal Cunningham got there first. IMO, Cunningham's damage to himself has swollen into a throbbing, abscessed sore spot for all young, photogenic, white men trying to run for high office. Anecdotal evidence: Women, particularly, no longer trust young, photogenic, white men. I keep hearing, "No more Cal Cunninghams!"
I don't think Jeff Jackson is another Cal Cunningham. I'll contribute to his campaign and vote for him. But I'll also watch the rise of Cheri Beasley with actual hope for the possibilities.
Frankly, I think Beasley would make the stronger candidate, especially if we wind up with Lara Trump running a cheerleader's campaign on the other side. Beasley has actually been on the ballot statewide multiple times. The first was her election to the NC Court of Appeals in 2008. Then she ran for and won her first seat on the NC Supreme Court in 2014. Governor Cooper would eventually appoint her Chief Justice, just in 2019, the seat she was defending last fall.

Kara Hollingsworth, the political consultant who made the announcement for Beasley and was quoted above, is partner in Three Point Strategies (TPS), an all-Black woman management firm -- described on LinkedIn as "a radical, Black, millennial-led, DC-based consulting firm." This purpose appears on their website:

We specialize in electing the first’s, the only’s and the truly magical. At Three Point Strategies we not only trust Black women, they are our North Star. We’ve worked with candidates running for US Senate to City Council and in 2017 TPS worked with six Black women mayoral candidates to usher in the #yearoftheblackwomanmayor.

[Not sure which six new mayors TPS worked with, but some 10 Black women won big-city mayorships in 2017, including in Washington, D.C.; Atlanta; New Orleans and Baton Rouge, Louisiana; Charlotte, North Carolina; San Francisco; and Chicago.]

Another Interesting Senate Candidate I Missed

Don't know where my head was on March 5th that caused me to miss this news (from James Arkin in Politico):

Higginbotham, 56, has never run for political office before and would be entering what is expected to be one of the most expensive and high-profile Senate races in the country next year. North Carolina is an open race and is among Democrats top targets, alongside Pennsylvania and Wisconsin, as they seek to protect their fragile 50-50 majority.

To the pileup of Democrats willing to jump into the 2022 Senate primary you can also add Black virology scientist Richard L. Watkins, profiled here, and former NC Senator Erica Smith.