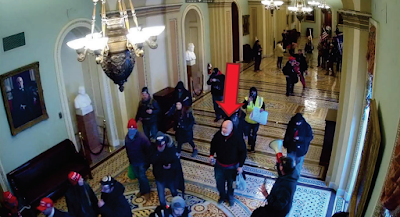 James "Les" Little was arrested by the FBI on Wednesday in Catawba County, charged with unlawful entry onto government grounds, two counts of disorderly conduct in a restricted building or on Capitol grounds, and parading or demonstrating in the Capitol. On Thursday, he appeared before U.S. Magistrate Judge David Cayer of Charlotte.

“We just took over the Capitol,” Little bragged in a text to a relative on January 6th. “And you are bragging?” the relative fired back in a fusillade of exclamation points and capital letters. "THIS IS TREASON!!! IF YOU DON’T CONDEMN THIS, NEVER BOTHER SPEAKING TO ME AGAIN! HORRIBLE, HORRIBLE PEOPLE. IT’S A COUP! YOU OBVIOUSLY HATE AMERICA!!!”

Then the relative turned in James "Les" Little to the FBI. He's the 10th (at least) North Carolinian charged for participation in the insurrection.
According to Michael Gordon, "Court filings by the U.S. Justice Department have alleged that North Carolina served as a recruiting ground and training site for right-wing groups that are now the focus of government conspiracy investigations linked to the Capitol assault."

Posted by J.W. Williamson at 3/26/2021 08:03:00 AM
Email ThisBlogThis!Share to TwitterShare to FacebookShare to Pinterest
Labels: Trumpism