What Congresswoman Virginia Foxx Voted Against (Bless Her Heart!) 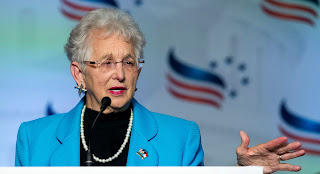 Virginia Foxx supposedly offers outstanding "constituent services," and I hope that's true (at least past the level of getting Capitol flags for local schools or squeezing out misplaced service medals for aging pensioners), but she's otherwise the Miss Murdstone of North Carolina politics, getting rich herself since gaining high office while remaining extremely stingy with the social safety (no money for you, New Orleans!).

(Miss Murdstone was the sadistic spinster in David Copperfield whose cruelty and stinginess provide obstacles for the hero's rise. You might glimpse a similarity, if you have bifocals.)

Foxx -- along with every other last Republican in both houses of Congress -- voted no on the "American Rescue Plan"(ARP). Their rationale was Christ-like frugality. What was their rationale when they gave the super-rich a very similar pile of cash in the "Trump tax breaks"? Frugality for everybody else, while Foxx in particular raids the buffet and makes sure the corporate boys are happy.

Specifically for restaurants and bars, the ARP can make grants to hospitality businesses that suffered mightily under the pandemic. The grants can be used to cover payroll, rent, utilities, and other operational expenses.
For non-profits, the ARP allows them to apply for loans to meet payroll and operating costs. The loans can potentially be forgiven.

The ARP provides billions targeted at a dozen states mainly in the South (including -- you guessed it! -- North Carolina) that wouldn't go along with Medicaid expansion under Obamacare. ARP offers lucrative buy-in possibilities for those Republican-dominated states. What will opposers like Berger Moore (Ltd.) do about it?
WRAL's Travis Fain posted two days ago a story about sudden detente between Governor Roy Cooper and Berger Moore (Ltd.), which seems to have germinated during successful negotiations on school reopenings. Cooper and Berger Moore (Ltd.) actually held an amicable press conference together last week. Since then, high level meetings between Berger Moore (Ltd.) and Democratic leaders in the NC House and Senate came off without anybody throwing a creme pie. No one came out and denounced the other side.
Travis Fain asked Berger (CEO of Berger Moore Ltd.) if he was softening on Medicaid expansion, which Berger has always hated for its Obama cooties. Berger's quoted answer whipsaws me like Republican yin and yang. What does he mean, and doesn't it count as tectonic movement on the right?

“I don’t think I’ve ever indicated that there is something that, if we get this, I’d agree to Medicaid expansion," Berger said Thursday, when asked what he'd want in an expansion deal. "My opposition to Medicaid expansion has been I think it’s bad policy. ... Nothing I’ve seen has led me to believe that there’s a reason to change my position on that."

Berger continued: “Are there some things I’d like to see done? Yeah. But whether or not that’s something that an arrangement can be worked out – I’m not saying no to that. I’m just saying that, at this point, I’ve always been willing to discuss Medicaid expansion, access to care.” [Emphasis added]

The ARP provides more than $30 billion to help low-income households pay their rent and to assist the homeless. States and tribes would receive an additional $10 billion for homeowners who are struggling with mortgage payments and other housing costs because of the pandemic.

The ARP provides about $39 billion for child care through an emergency fund to help child care providers pay for staffing, rent, and supplies, and through a block grant program that subsidizes the cost of child care for low-income families.

There's much MORE in the ARP for Virginia Foxx To Vote Against, Because It Helps the Very People She Likes To Claim She Once Was

There's plenty of news coverage, O my brethren, all over the place about the full details of what's in the American Recovery Plan, without a doubt the most progressive legislation since the Great Depression. Democrats can celebrate it as a milestone for rebuilding the social safety net. The Republicans can lie in bed with Trump and rue the day the Federal government gave so much to those who have so little instead of to the richest.

Unfortunately, this is typical for the GOP. They never care about the deficit when giving money to the rich. They only do that when the money goes to those who need it most. It's pathetic.