A Significant Defection from the Southern Baptist Convention 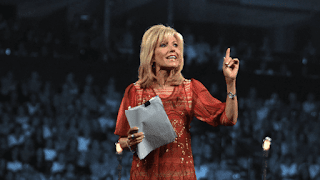 I was a good Southern Baptist when I lived in Texas. I was in church three times a week. I attended a Southern Baptist College and always went to chapel services. When cracks appeared in my foundation -- because I learned history and I learned science -- oh, Buddy, the whole temple collapsed like Samson at the pillars.

So I have more than a little sympathy and fellow-feeling for Beth Moore, a very prominent Southern Baptist writer and teacher, for announcing her departure from the Southern Baptist Convention (SBC) because of its appalling fealty not just to Trump but to Trumpian values. “I am still a Baptist, but I can no longer identify with Southern Baptists,” she said.

“Beth Moore has more influence and more cachet with Southern Baptists, especially white Southern Baptist women, than the vast majority of Southern Baptist pastors or other leaders. So her leaving is not just about one individual,” said another prominent Christian leader who happens to be Black.
Beth Moore has been trending toward a split with the SBC since the election of 2016 and especially following Trump's "Access Hollywood" taped confession about how he forces himself on weak women. In 2018, she published a letter to her “brothers in Christ” sharing her bruising experiences with sexism as a female leader in the conservative Christian world. On Twitter, where she now has more than 950,000 followers, she has denounced Christian nationalism, the “demonic stronghold” of white supremacy and “the sexism & misogyny that is rampant in segments of the SBC.”
How did the pharisees take her departure? Like this:

“The fact that Beth Moore joyfully promotes herself as a woman who preaches to men is only the tip of the iceberg of her problematic positions,” Tom Buck, senior pastor of First Baptist Church of Lindale, Texas, said in a post online following the news.

“I sincerely wish Mrs. Moore had repented rather than left,” he wrote. “But if she refuses to repent, I am glad she is gone from the S.B.C. Sadly, leaving the S.B.C. won’t fix what is wrong with Beth Moore.”

Southern Baptist men do not like uppity women, and they might, if it hadn't gone totally out of fashion, burn a few of them at the stake. As would their new prophet Trump.

Posted by J.W. Williamson at 3/12/2021 12:07:00 PM
Email ThisBlogThis!Share to TwitterShare to FacebookShare to Pinterest
Labels: Donald Trump, religion and politics