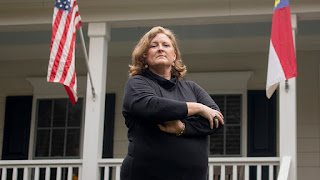 Kimrey Rhinehardt, who actually used to work for Richard Burr on Capitol Hill, decided she needed a divorce from the Republican Party while watching the Capitol insurrection. “I felt like I had no political home,” Rhinehardt said. “I think I’m on a mission to create one. Not just for me but people who feel the same that I do.”

Rhinehardt re-registered as "Unaffiliated," and now she's launching a petition drive to get on the 2022 ballot as an independent candidate for US Senate (her old boss's seat, though she worked for Burr when he was in Congress and before he made it to the Senate). It will be a heavy lift. She needs 84,000 verifiable signatures on the petition, an unconscionable rule that shows you how thoroughly the two major parties have rigged the system to shut out people like Kimrey Rhinehardt. (Make that 84,000 ink signatures.)

The News and Observer posted her introductory video. As she talks, she's handling Republican memorabilia from a lifetime of conservative political activism, including photos of her posing with every prominent Republican politician from Jesse Helms to Bob Dole to Richard Burr. She was a party animal. She was also a political science major at AppState.

“I want North Carolina’s voices to be heard. I don’t want it to be a party-driven message,” she told the Chatham News Record. “Because most people that I know don’t sit down and think about the issues facing their family in a political way. They don’t sit down and say, ‘What would the Republican Party suggest that I do?’ or ‘What would the Democratic Party suggest that I do?’ ”

Posted by J.W. Williamson at 3/09/2021 08:25:00 AM
Email ThisBlogThis!Share to TwitterShare to FacebookShare to Pinterest
Labels: Kimrey Rhinehardt, Richard Burr, Trumpism