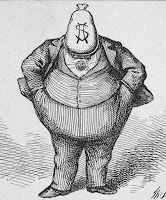 Political corruption remains a big motivating factor for how voters view their government. We just came off four years of some of the most astounding, out-in-the-ever-loving-open political corruption in our nation's capitol, and that display of civic putrefaction must have had something to do with the resounding loss of power in Washington for a Republican Party that sold its moral compass to gain favor with a Golden Ass. That spectacle of money-grubbing self-interest rivaled nothing in our history so much as the Robber Baron period at the end of the 19th Century, which also happened to coincide with the Rise of the Corporations.

Not surprisingly, a new statewide poll commissioned by Carolina Forward finds overwhelming evidence that the voting public in North Carolina sees public corruption as "a major problem" (and how you choose to define "major" is the whole ballgame). Furthermore, this poll finds corporations, and their political $$, fingered as a major cause of public corruption. The money game in politics could spoil a nunnery, let alone a 25-year-old Congressman from Hendersonville, say.

I'm not able to reproduce the poll's handsome pie charts here, but they're worth studying. Some 67% responded that corruption in our state government is a major problem (vs. 21% "minor problem"), and a whopping 80% say that large corporations have too much power in the state legislature (vs. 8% "Not too much"). Since that watershed election of 2010 and the illegal gerrymandering that followed it, the state legislature has been a wholly owned subsidiary of Berger Moore, a casual partnership that operates with an iron fist and plenty of ruthlessness (another name for corruption, I could argue). 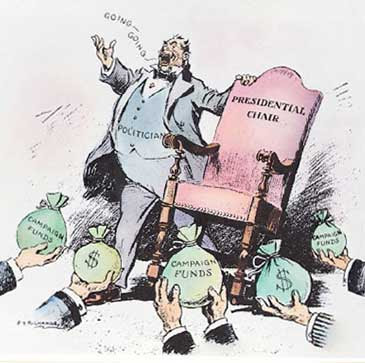 Item. The leader of a giant insurance conglomerate corrupts the chair of the NCGOP, who in turn attempts to corrupt the Secretary of Insurance. The insurance executive is now in jail, the GOP chair, pardoned by Donald J. Trump. Many others from both political parties (yuck!) also benefitted from the insurance executive's generosity and did not give the money back.

Item. Harnett County Rep. David Lewis, chairman of the influential House Rules Committee in Raleigh, charged with federal financial crimes -- essentially embezzlement from his own campaign funds to pay for his personal life, which had been (just incidentally) difficult to keep straight and even, so a bunch of money went into Lewis's pocket where it didn't belong. ("But he needed it, Judge!") Rep. Lewis pleaded guilty, took a deal, resigned his House seat, and served no time.

Item. The multitudinous "deals" House Speaker Tim Moore has allegedly made, based on his power to move shit. Moore is the Gaston County brass monkey who turned to gold in Raleigh.

Item. North Carolina's newest Secretary of Labor, Josh Dobson of McDowell County (Marion), has ethics allegations (double-dipping) filed against him with the Legislative Ethics Committee less than a month before last fall's election. Luckily, the Legislative Ethics Committee is also run by his fellow Republicans. Nothing has come of the complaint so far.

Item. The Ashe County Sheriff scandal of 2017, wherein a new Republican sheriff appointed to the office by the all-Republican Ashe County Commission to follow the administration of a popular Democratic sheriff who retired. Said new sheriff is pretty quickly facing felony charges, followed by misdemeanor charges for refusing to comply with a public records request from WBTV. That sheriff agreed to resign, with charges dropped.

I could go on. I haven't even touched on the voter suppression efforts of the Watauga County Republican Party, starting in 2013, and the never chronicled election of 1998 in Watauga, when the corruption of a local ambulance service fueled a Democratic flip of the County Commission. The stories I know!

The Utility of the Carolina Forward Poll

Whether that 80% who disdain the outsized power of corporations, overlapping with the 67% who say public corruption is "a major problem" in North Carolina -- whether those pluralities ever put two-and-two together and actually vote their ethics -- that's a well with no water in it. We've maybe become so used to public corruption, the plain daylight buying of votes and offices, that we hardly even notice unless the corruption touches us directly. (All public corruption does touch us directly, but that's a hair-splitting for another day.)

Posted by J.W. Williamson at 3/08/2021 10:07:00 AM
Email ThisBlogThis!Share to TwitterShare to FacebookShare to Pinterest
Labels: Carolina Forward, Republican corruption