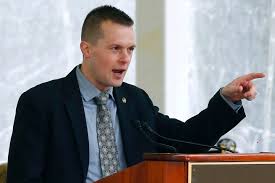 Jared Golden, of the 2nd CD of Maine, was the only Democrat in both House and Senate to vote against the $1.9 trillion American Rescue Plan. The 2nd Congressional District of Maine is incidentally the largest in land mass east of the Mississippi, encompassing nearly 80% of the total land area of Maine outside the urban centers of Augusta and Portland. Golden is a former Marine who served in Iraq and Afghanistan. Prior to becoming a US Representative, he served in the Maine House of Representatives from 2014 to 2018. He flipped the 2nd CD red-to-blue in 2018 running as a political moderate in a district that Trump took in 2016 by seven points. In 2018 Maine used "ranked-choice voting" for the first time. Golden lost in the first round, but came from behind in the second to win. He won reelection in 2020 with 53% of the vote in the first round.

In a statement, Golden said, “Although I support the Senate’s effort to reduce the number of wealthier households that will receive stimulus checks, they did not go far enough...." He also said he was unhappy that the measure to raise the minimum wage to $15 got booted from the bill. “I voted for a $15 minimum wage in the last Congress, and given the opportunity, I intend to do so again.”
Posted by J.W. Williamson at 3/11/2021 01:21:00 PM
Email ThisBlogThis!Share to TwitterShare to FacebookShare to Pinterest
Labels: Jared Golden