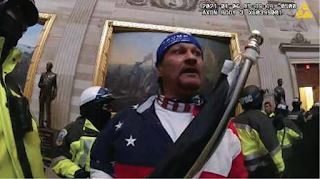 Harris wore a Go-Pro camera while participating in the insurrection and posted photos in real time. He's easy to spot in other photos, wearing an American flag sweater and a red, white, and blue bandanna or mask around his neck. On his head, a Donald Trump ski cap in the same color scheme. He carries a flagpole flying a red, white and blue banner.

The FBI said it learned of Harris from an anonymous tipster who reported that he knew someone who had been posting interior photos of the Capitol on his Facebook page.

When agents questioned Harris two weeks after the break-in, he admitted that he’d carried a flag and a megaphone into the Capitol, and shot video with his Go-Pro and his phone.

According to the affidavit, the FBI received additional confirmation of Harris’ identity from inside sources — two unidentified witnesses who went with Harris to Washington and picked out their travel companion from the photos they were shown.

According to Michael Gordon, Harris is "at least the ninth North Carolinian charged with the violent breaching of the Capitol."

Posted by J.W. Williamson at 3/22/2021 07:01:00 AM
Email ThisBlogThis!Share to TwitterShare to FacebookShare to Pinterest
Labels: Trumpism