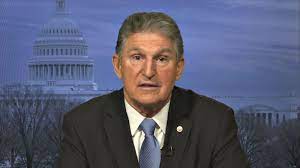 Joe Manchin doesn't care that progressives hate him. He recently taunted "liberals" mad at him for being out of step on many issues including the elimination  of the filibuster:

“What are they going to do, they going to go into West Virginia and campaign against me? Please, that would help me more than anything.”

He says he believes in the Cookie Fairy and a "bipartisan Senate." He doesn't believe that. He is not dumb enough to believe that 10 Republicans will voluntarily vote someday for something Biden wants, if everyone will just compromise. He doesn't believe that. It's a convenient excuse for being really terrified of your constituents. Do we need to be reminded? West Virginia voted for Trump last fall by 40 points. Manchin holds his seat because he's so "regional."

Found this summation of Manchin by Jonathan Martin in the NewYork Times very helpful:

A former high school quarterback who friends say still relishes being at the center of the action, Mr. Manchin is something of a unicorn in today’s Congress. As a pro-coal and anti-abortion Democrat, he reflects a less-homogenized era when regionalism was as significant as partisanship and senators were more individual actors than predictable votes for their caucus.

Twice elected governor before claiming [Robert] Byrd’s [Senate] seat, he’s the only lawmaker standing in the way of an all-Republican congressional delegation in West Virginia .... he is an unlikely majority-maker of the Democratic Senate.

"Still relishes being at the center of the action." Got it! Wants to be loved and thought of as civic savior by his voters. Who happen to hate Biden and hate most Democrats. I almost feel sympathy for Manchin's balancing act. But not his character. 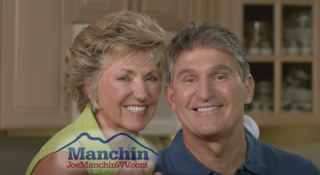 So this news reached us last week: Joe Manchin's wife Gayle has been named by President Biden to head the Appalachian Regional Commission (ARC).

(I say "head" when the title is actually Federal Co-Chair, because the structure of the ARC also includes a figurehead co-chair, mandated to be the governor of one of the constituent states. Gov. Ralph Northam of Virginia is currently Federal Co-Chair. But the civilian Co-Chair is the real showrunner. Has always been that way.)

What are Gayle Manchin's qualifications? The White House on Friday cited her career as an educator and her service as the first lady of West Virginia, when Manchin was the state’s governor from 2005 to 2010. In other words, she's the "missus" of somebody Biden needs to make happy. First thing I thought: The ARC appointment for Manchin's wife is reward for Manchin's vote for the American Rescue Plan (ARP).

What is the ARC? It's an economic development partnership agency established in 1965 through which the federal government works with 13 states and 420 counties across the Appalachian region to theoretically help invest in communities and spur job creation. The criticism of the ARC by actual Appalachian activists tended to highlight the ARC's aggressive four-laning of highways, to get the coal, gas, timber, you name it -- out of state faster.

I'm hoping that Biden can get more out of this clear case of social bribery than just the vote for the ARP. The vote on ending the filibuster as we know it? The vote on an infrastructure bill that will put a tax on every coal baron in the state of West Virginia? The vote on voter rights?

Senator Joe Manchin is the dealmaker/breaker because the power structure of the N. C. Democratic Party pushed another less than ideal candidate upon us. Cal Cunningham would most likely have been a sure supporter of neoliberal solutions to conservative/neoliberal created messes. At least he would have supported the Presidents plan and not insisted being at the "center of action". If only he would have kept his pants on, the leadership of NC Dems has a role in this failure. Looking forward to the day N. C. Dems offer a strong candidate of and for the people with a little higher moral compass.