Kevin Donohoe, who was arrested by the FBI on March 18 in Kernersville as a Proud Boy leader involved in the insurrection, is now being called a "pivotal" figure in a conspiracy to take over the US government. This is the reporting by Michael Hewlett: 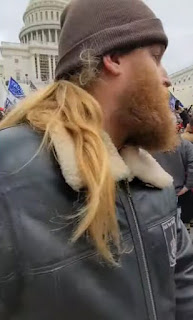 Federal prosecutors say this is a photo of Charles Donohoe, the Kernersville Proud Boys leader, at the U.S. Capitol on Jan. 6, 2021.

He also assisted another Proud Boys member in carrying a riot shield stolen from a police officer on Jan. 6 and sought to destroy electronic messages afterward, prosecutors said.

Posted by J.W. Williamson at 3/28/2021 09:06:00 AM
Email ThisBlogThis!Share to TwitterShare to FacebookShare to Pinterest
Labels: Charles Donohoe, Trumpism