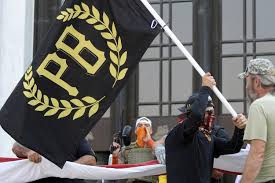 Charles Donohoe of Winston-Salem was arrested yesterday in Kernersville by the FBI for conspiracy to interfere with law enforcement officers at the Capitol on January 6th and for obstructing the certification of President Biden’s electoral victory. Donohoe's arrest was "part of a widening investigation that now includes 13 people identified in court papers as members of the Proud Boys. The right-wing group has been associated with protests organized by white supremacists and is designated as a hate group by the Southern Poverty Law Center" (Richard Stradling).

Although my count was up to six (counting Donohoe) of North Carolinians arrested for participation in the insurrection, the Raleigh News and Observer sets the number "at least " at eight.

Twitter activist @m1523751 says that Donohoe goes by "Hunter Donohoe" on Facebook and was formerly with the USMC.

Posted by J.W. Williamson at 3/18/2021 08:35:00 AM
Email ThisBlogThis!Share to TwitterShare to FacebookShare to Pinterest
Labels: Charles Donohoe, racism, Trumpism