Mark Your Calendars: Trump Gets Dunked Again in Georgia 4 Days After New Year's 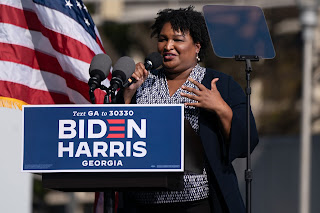 On January 5th, the voters in Georgia will need to go back to the polls for a crucial run-off election. There's some thought out there that it'll be another referendum on Trump (I add to that thought below against my will because I want so much to be done with him). Those voters in Georgia also done with Trump will need to come out on January 5th with greater force than they mustered last Tuesday, which was a lot, because control of the US Senate is on the line. My peeps in Georgia need either to vote early (early voting will go on for 3 weeks and will start just a month from now -- yikes!), or request an absentee-by-mail ballot, or plan to show up appropriately dressed at a local poll on January 5th -- to select not one but two US Senators. Both Republican Kelly Loeffler's seat (she was just appointed this year and has to run in her own right by state law) and Republican David Perdue's seat (he's finishing his 1st term) are on the line. They're forced into runoffs because neither received 50% + 1 of the vote last Tuesday. Loeffler got 25.9% in the three-way special election, trailing Democrat Raphael Warnock by over 341,000 votes, while Perdue is currently leading Democrat Jon Ossoff with 49.8% of the vote, not 50% + 1. Currently, because the count is still going on in Georgia. Perdue leads Ossoff by 90,274 votes.

My main political ops contact down there told me this:

Yes, there is a chance [Democrats could win those seats].

However, Blacks are historically iffy on participation in runoffs. That it’s in January is a problem, too.

Warnock proved to be a great surprise and would have won outright if only Lieberman’s kid and those other bozos dropped their vanity campaigns [7 other Dems were on the ballot with Warnock including former Senator Joe Lieberman's son]. Still the key to victory for either or both will be GOTV.

The other factor is the sheer power of the Republicans to galvanize quickly around bozos and, in the case of Loeffler, bozettes. Clearly, she can be beaten because she's still pretty easily baited. Perdue just hides. I doubt he’ll do a real interview or open town hall type thing through the process. Point is, it will be tough, but I think it can be done.

I personally know three people in Watauga and Caldwell counties who plan to go down and volunteer their time and shoe leather to Stacey Abrams' Fair Fight org, which has been a major mover of the Black vote and which can be totally credited if Joe Biden ends up carrying Georgia (which seems likely). Currently, Biden leads Trump in Georgia by 10,196 votes.

There'll be hundreds, if not thousands, of Democratic activists heading from all over the nation to Georgia, from now through Thanksgiving, Christmas, and New Year's. Guest-housing is going to be at a premium. And money's gonna gush on both sides. You know McConnell will turn on the hose and so should Democratic money-bags. If you (not that you're a money-bag) want to donate to Fair Fight, go here.

Will the Runoff Be a Referendum on Trump?

From the looks of it, Trumpists are prepared to deny reality going into the next millennium. Trump has every intention of fanning those flames. Will their resentments and lust for revenge drive even more Trumpists to the polls on January 5th? Or will they get over it by then? Doubtful the latter, reasonably to be expected the former (although maybe by January 5th they'll still be hungover from the combo of bust-head and fantasy scenarios of mass extermination). Isn't it likely that Trump, still in performance mode as King Lear, will bestow his blessing on both Loeffler and Perdue to keep his legacy alive in the Senate?

Because if both Loeffler and Perdue lose, the US Senate goes to a 50-50 split with Kamala Harris empowered by the Constitution to break ties. Now that's a prospect -- unlikely as it may be -- to galvanize volunteers and electrify a voting population historically accustomed to losing but now transformed by Stacey Abrams' amazing energy. The new majority will be looking to nail some pelts to the old smokehouse door.

In most other states -- the vast majority not below the Mason Dixon Line -- a plurality of votes in a primary wins even if 50% + 1 didn't choose the winner. The 50% rule is popular in the South because ... well, think about it. Loeffler has a runoff with a Black candidate:

Georgia’s runoff law was created in the 1960s as a way to preserve white political power in a majority-white state and diminish the influence of Black politicians who could more easily win in a multicandidate race with a plurality of the vote, according to an Interior Department report.

Since the 1990s, Democrats have won only one of seven statewide runoffs in general or special elections, according to Inside Elections, the nonpartisan political newsletter. [Luke Broadwater]

I've written about Ossoff multiple times, but this is probably the money shot. No, this is the money shot, courtesy of YouTube -- the moment in Ossoff's one debate with Perdue when Ossoff called him a crook to his face and Perdue had no defense nor denial. This is the moment when many woke up to the possibility that Ossoff is a Democratic bad-ass and therefore worthy as a standard-bearer. Perdue canceled a follow-up debate.

I wrote about Raphael Warnock back in August. I was impressed with his introductory video, and he clearly has the personal magnetism to move voters:
Posted by J.W. Williamson at 11/08/2020 11:46:00 AM
Email ThisBlogThis!Share to TwitterShare to FacebookShare to Pinterest
Labels: David Perdue, Donald Trump, Jon Ossoff, Kelly Loeffler, Rev. Raphael Warnock, Stacey Abrams