I'm Part of the Problem 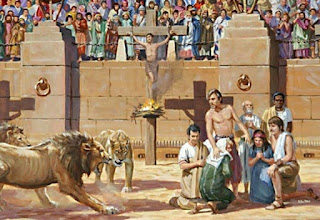 They were warning us when I was a kid that television was going to dumb us down. They were right about that. But it's also made us meaner. We love to see people tortured, don't we? That's what "reality" shows are all about. Torturing people. Embarrassing them. Watching them squirm, make denials, plead for acceptance. The people who sign the legal waivers to be on reality shows -- Judge Judy alone has humiliated thousands of them for profit for decades -- they willingly serve themselves up as snacks for the rest of us who obviously enjoy starring at the pain of others -- pain as public performance. Do we get validation of own superiority from watching it? Yes. Like the Romans who enjoyed a good afternoon at the Coliseum, we're mollified by the humiliation of others. When it's on TV, it hardly even registers. It's just a show.

Is it a human gene, or a suite of genes, triggered by some mysterious stimuli (like feeling kept down by forces you resent), to side with a bully? Why would over 70 million people, scattered in every state but concentrated in some, watch four years of Trump's cruelty -- his petty meanness on Twitter, his caging of kids, his farting in the face of democracy (and decency), his using foreigners as scapegoats, his persecution of certain religions -- and want four more years of that, or 12 more years, or hell! let's make it forever? Those voters liked the cruelty of Trump, the end-stage symptom of a wounded soul looking for vindication and revenge. Imagine Walder Frey had seized the Iron Thone and hosted a Red Wedding for liberals. (See what TeeVee has done to me!)

The performance of meanness. Isn't that what the Proud Boys are all about? The guys in gimme caps in the big new trucks, muscling the big flags through traffic? The people with big guns marching into peaceful settings, just for the hell of owning the libs and scattering the cucks? The spoiling for a fight, the eagerness to bust heads, the need to touch other flesh violently? It's what's been unleashed by Trump. And he's its biggest fan:

ANTIFA SCUM ran for the hills today when they tried attacking the people at the Trump Rally, because those people aggressively fought back. Antifa waited until tonight, when 99% were gone, to attack innocent #MAGA People. DC Police, get going — do your job and don’t hold back!!!

It's a show to him. It's a show for them. And we're all watching it too and commenting because it's what's on in the must-see primetime of our lives.
We've so doomed.
Posted by J.W. Williamson at 11/15/2020 01:13:00 PM
Email ThisBlogThis!Share to TwitterShare to FacebookShare to Pinterest
Labels: Donald Trump