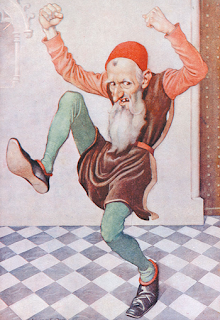 Sitting Chief Justice Cheri Beasley is now leading Rumpelstiltskin-in-a-former-life Paul Newby for the privilege of running the court. The vote is currently 2,685,809 (Beasley) v. 2,684,691 (Newby), a lead of 1,118 votes.

The deadline for Absentee-by-Mail ballots was yesterday, and the counting of those votes into last night, along with several thousand provisionals across the state, account for Beasley's sudden reversal of fortune. She was trailing on election night, and some of us thought that she had sure nuf lost, an eventuality that hurt as much as the Cal Cunningham trainwreck.

Newby, currently an associate justice on the NC Supreme Court, is known for extreme partisan views mixed with dominionist religiosity (and possibly the ability to spin gold out of straw).

If that thousand-vote lead holds, Beasley will be presiding over a 5-2 Democratic majority on the state's high court. Phil Berger Jr., whose main talent appears to be upward mobility, beat Lucy Inman for Newby's open seat by 69,417 votes (1.3%), and Republican Tamara Barringer beat Democrat incumbent Mark Davis by almost 128,000 (2.4%). All the Democratic candidates for the Court of Appeals lost to Republicans, but all those races were close. The Republicans generally won with a 2.5% edge. But the Court of Appeals is going to be a tough venue for certain kinds of justice for the foreseeable future.

This race is maddeningly fluid. By the time I had written and posted the above, Newby was leading Beasley. The lead continued to switch throughout the day. Currently, at 8:35 a.m. EST on Saturday, Beasley is leading Newby by 35 votes.

How did this work out?

Beasley is now trailing Newby by 400+ votes. I haven't looked for the exact number. There will be a recount. Even that low number will be difficult to overcome.