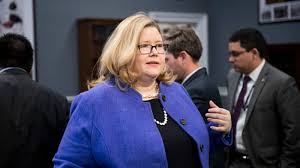 The head of the General Services Administration, Emily Murphy, the formerly anonymous Federal employee who has the power to launch the presidential transition, wrote her "letter of ascertainment," and it might supply endless grist for psychological profiles for years to come.

She says that the law gives her sole power to open the Federal government to Biden's transition teams. (She never addresses him as "President Elect," by the way.) Sole authority. It's all her decision. No one pressured her to delay the ascertainment. No one ordered that she issue her letter yesterday. No one in the executive branch or in the White House. No one.

It's Trump-world speak for "I know that I must deny being terrified of existential annihilation."

Immediately, Twitterman tweeted that he ordered her.

Her letter is actually not only a Federal lie of remarkable proportions but also tawdry, as she lapses into whining about the abuse she's taken from a public unamused by her stonewalling.

Deal with it. You chose to lie down with that dog.

Posted by J.W. Williamson at 11/24/2020 08:50:00 AM
Email ThisBlogThis!Share to TwitterShare to FacebookShare to Pinterest
Labels: Donald Trump, Emily Murphy