Because keeping up and caring about all this stuff is so exhausting. 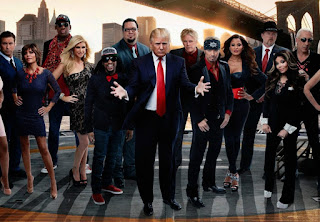 I mean, I loved "The Apprentice," especially "Celebrity Apprentice," and I think having such an ingenious -- he came up with all those tasks every week -- and decisive president is what people I follow on Twitter say we need right now. Anyways, when is the election exactly?

I've heard of socialism. It's bad. I will avoid it like I avoid looking like a slouch when I go out of the house.

I don't even know what the state legislature does. Something about naming post offices, I think. No, I've never heard of Phil Berger or Tim Moore. Were they on "The Apprentice"?

I keep hearing about a big party in Georgia pretty soon after New Year's, and if there's live music I want to go sooo bad. The travel problems -- not just the weather in January, but have you ever been in traffic in Atlanta? Plus people look at you hard about those masks. This flu everybody's talking about -- I've had the flu before and it's no biggie. Besides, I had my flu shot. And how come the lines at the drive-throughs are miles long? Who's playing in Georgia, anyway? If I had a list of the performers, I could see if it's really worth the effort. Maybe I should try to get others to help drive and share the gas.

I don't know a thing about student debt, about why all those Black people are protesting, about "unemployment benefits and relief packages for the middle class," about Afghanistan and Iraq and the rest of "foreign policy" (yuk!), about some chick at the GSA (whatever that is?), about whether or not the climate is changing for the bad ... so don't even. Don't even ask me. I have heard about maybe North Carolina's legalizing marijuana, and I'm interested in that.

Anyhow, I hear "The Crown" is terrific, and I mean to get to it as soon as I finish bingeing on all ten seasons of "Curb Your Enthusiasm."

Holly Robinson Peete can tell you how it is to be Black on the "Apprentice."
How come we don't got no Ralph Warnock and Johnny Ossoff up here?

I know you are under no obligation to display this, but would appreciate it if you would. There is a new conservative blog. It is at https://anewwataugaconservative.blogspot.com/

The administrators that hacked and stole the old blog will not publish the new address.

Thank you for posting the web address for A New Watauga Conservative.

I have been unable to contact Blogger from the old site and think his email may have been hacked.

I suggest you take precautions to maintain your site from blog pirates.

I think what Wolf's Head is trying to say, The Watauga Conservative is now under an administration that is not only more moderate but also anti-fascist, which has driven all the regulars over to their new site, The New Old Watauga Conservative. Sometimes the world as it is just amazes us. Wolf's Head and the old gang keep saying their site was "highjacked," but if so, it's the most unchallenged highjacking in social media history.

Folks can view the new and old sites and decide for themselves, just as they can read JW's postings here.

However, hijacking a blog from an old man as was done to the old blog is very low, especially when Blogger is denied access to his own site, and doesn't have the technical knowledge to fight back.

I have tried to respond to an email BLogger sent me regarding his site, but all of my emails are bounced back from the address he sent them from. I assume his email has been hacked as well.

Repeated remarks at the old blog concerning the theft are summarily deleted or not posted at all.

My suggestion to JW to safeguard his site to prevent someone from taking it over still stands.

Again I thank JW for posting the address of the new blog.