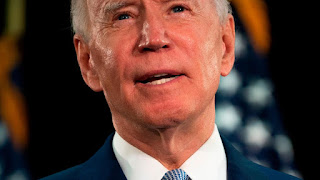 Joe Biden will get nothing through the US Senate as long as Mitch McConnell is running it. Joe Biden needs to take a page from George W. Bush, who won no mandate in 2000 -- it took the Republicans on the US Supreme Court to hand the presidency to him -- but he governed like he was surfing forward on a massive tidal wave of approval from the American public.

Or Biden could take a similar lesson from his immediate predecessor. Trump was always a minority president, but he governed like he had the biggest mandate on the block (White House insiders whispered that his mandate was really very small, well below average). Even after he lost his Republican majority in the US House, Trump still acted like nothing stood in his way.

There's some important things Biden can do by executive order, like first of all reversing all those Trump executive orders. Hey, Joe, govern like you have a pair. Impress the folks in the cheap seats.

Posted by J.W. Williamson at 11/06/2020 10:13:00 AM
Email ThisBlogThis!Share to TwitterShare to FacebookShare to Pinterest
Labels: Donald Trump, Joe Biden