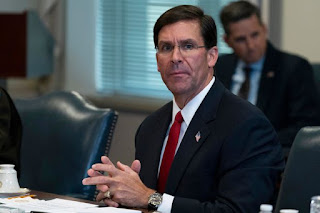 Donald Trump tweeted today, “Mark Esper has been terminated." It makes zero sense to replace the Secretary of Defense at this point in his presidency, except for the pure joy of satisfying his cruelty and lack of class.
It is the first time in the modern era that a president seeking reelection has removed his Pentagon chief after Election Day. Presidents who win reelection often replace Cabinet members, including the secretary of defense, but losing presidents have kept their Pentagon chiefs in place until Inauguration Day to preserve stability in the name of national security. Esper's firing is unsettling for the Pentagon and a source of concern for international allies and partners.
Esper’s strained relationship with Trump came close to collapse last summer during civil unrest that triggered a debate within the administration over the proper role of the military in combatting domestic unrest. Esper’s opposition to using active duty troops to help quell protests in Washington, D.C., infuriated Trump, and led to wide speculation that the defense chief was prepared to quit if faced with such an issue again.
Posted by J.W. Williamson at 11/09/2020 01:44:00 PM
Email ThisBlogThis!Share to TwitterShare to FacebookShare to Pinterest
Labels: Donald Trump, Mark Esper

Folks, let's keep one eye on the Nuclear Pumpkin, in case Donnie tries to kick it.
Can Lucy pull it away in time? The Doomsday Clock is the shortest ever, 100 seconds before Midnight.
Esper had some Lucy traits.

Incredibly off-topic, but has anyone seen what's going on at Watauga Conservative?

Anonymous, I've noticed and it's amazing! That guy who was running it -- called himself "Blogger" -- said a while back that God had spoken to him and told him personally that He had chosen Trump to save America. Blogger quit the blog, he said, to pray full time for Trump's reelection. He must be in a dark place now. But this new person -- "Lightning" -- actually seems sane.

The A Watagua Conservative Blog site was hijacked. My guess is that it is the person called "Lightning" who hijacked it. Just my guess. He also has been commenting under the name "Liberal POV" and no, not the original Liberal POV.

I might be wrong about "Lightning" being the hijacker, but I can't get on the site as a blogger to post or comment and Blogger cannot get on the site. The hijacker claims to be "Anti-Fascist". Fascists hate free speech and will rob, steal, and cheat to get their way. There is proof.