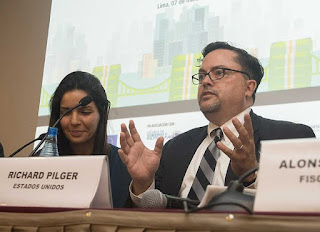 Yesterday, minutes after Attorney General William Barr waded into Trump’s unfounded accusations of widespread voter fraud and told federal prosecutors that they were allowed to investigate “specific allegations” of voter fraud before the results of the presidential race are certified, Richard Pilger, the Justice Department official who oversees investigations of voter fraud, stepped down from his position.
“Having familiarized myself with the new policy and its ramifications,” Pilger wrote to his colleagues, “I must regretfully resign from my role as director of the Election Crimes Branch.”
Barr’s directive ignored the Justice Department’s longstanding policies intended to keep law enforcement from affecting the outcome of an election.
“It would be problematic enough if Barr were reversing longstanding Justice Department guidance because of significant, substantiated claims of misconduct — that could presumably be handled at the local and state level,” said Stephen I. Vladeck, a professor at the University of Texas School of Law. “But to do so when there is no such evidence — and when the president’s clear strategy is to delegitimize the results of a proper election — is one of the more problematic acts of any attorney general in my lifetime.”
In the meantime, the act of a career Department of Justice official in charge of investigating election crimes is one of the more honorable decisions we've witnessed this month.
Posted by J.W. Williamson at 11/10/2020 08:59:00 AM
Email ThisBlogThis!Share to TwitterShare to FacebookShare to Pinterest
Labels: Richard Pilger, William Barr

A Watagua Conservative was hacked and taken over by an Antifa type.

"Anti-Fascist
November 09, 2020
Nearly (only) 82 years after Germany's Kristallnacht, Democratic supporters in California were targeted with eerily reminiscent paint markings. As the above is a very clear fascist tactic, we repeat that this blog is (newly) anti-fascist and denounces this type of behavior."

Anonymouse 4:39 PM- You must have misread my comment. A Liberal who fancies himself an "Anti-Fascist" (Antifa) hijacked the blog. The blog didn't hack anybody, only the Liberal hacked the blog. He gained access to it under false pretenses and then locked everyone else out and changed it to a Liberal blog site.

Thank you WataugaWatch for allowing my comments. I just wanted alert some of the fine people who were regular commenters about what happened.

Sarkazein - did someone shut down your moronic bullhorn? Sorry that you have to run to this blog to complain. Sad.

Aren't you a geriatric from Texas? WTF are you doing trolling WNC blogs!? Please find another hobby. I hear stamp collecting is really fun.

The poor lonely hijacker is even using my screen name as posting comments on the Watagua Conservative stolen site. I must of beaten him so badly in debate that he wants to be me. I have made no comments on WC since the site was taken over except two the first day. He is posting old comments and making up new ones.

This is my last comment on the matter. He's a liberal Antifa wanna-be and a thief.

Nice try. No one cares.