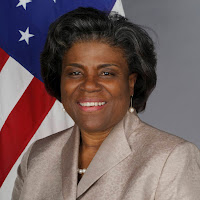 Biden is reportedly going to name Linda Thomas-Greenfield as his UN Ambassador. Gotta fall back on Wikipedia here:

[She] is an American diplomat who served as the Assistant Secretary of State for African Affairs in the United States Department of State's Bureau of African Affairs from 2013 to 2017. Thomas-Greenfield has served as Deputy Assistant Secretary, Bureau of Population, Refugees and Migration (2004–2006), Ambassador to Liberia (2008–2012), and Director General of the Foreign Service and Director of Human Resources (2012–2013). In 2017 she was terminated by the Trump administration as part of a "purge of senior State Department officials and career professionals over nearly four years."

Love it that she's one of the career diplomats purged out of the State Department in the early days of the Trump administration. 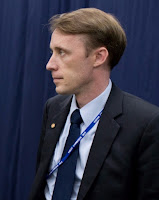 Jacob Jeremiah Sullivan (born November 28, 1976) is an American policymaker who was a senior policy advisor to Hillary Clinton's 2016 presidential election campaign, with expertise in foreign policy.

At present, Sullivan is the Montgomery Fellow at Dartmouth College and a senior fellow and Master in Public Policy faculty member at the Carsey School of Public Policy.

Sullivan was also a senior advisor to the U.S. government for the Iran nuclear negotiations and a visiting professor at Yale Law School.

Prior to teaching at Yale, Sullivan worked in the Obama administration as Deputy Assistant to the President and National Security Advisor to U.S. Vice President Joe Biden. He also served as the Director of Policy Planning at the U.S. Department of State, and as Deputy Chief of Staff to U.S. Secretary of State Hillary Clinton. Prior to this, he was deputy policy director on Hillary Clinton's 2008 presidential primary campaign, and a member of the debate preparation team for Barack Obama's general election campaign. [Wikipedia]