The Cost of Defeating Trump at All Costs 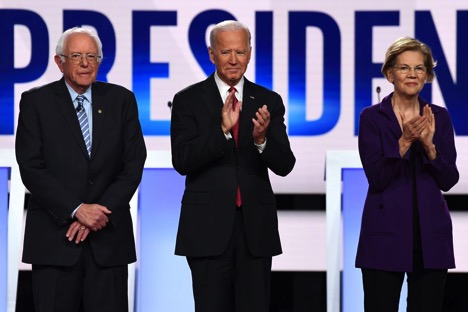 Around this time last year, the Democratic Party was in the midst of a heated debate over the direction the party needed to take to defeat Donald Trump and move the country forward. Early on, it was an exciting primary campaign defined by ideas. Bernie Sanders appealed to young and working-class voters with a bold agenda centered around economic, social, and environmental justice. Elizabeth Warren released a string of proposals that balanced progressive ideals with pragmatic solutions. Andrew Yang built a small but devoted following around his Freedom Dividend, a proposal to ease economic anxiety and spur innovation by giving every American $1,000 a month. And it wasn’t just the anti-establishment wing of the party offering big ideas. Democratic stalwarts like Jay Inslee and Julian Castro also got in on the fun with ambitious proposals on the environment and immigration.

In the end, however, this campaign was never going to be about big ideas or any ideas at all. With a deranged psychopath occupying the White House and terrorizing blue America with every tweet, many Democratic voters simply were not interested in debating the intricacies of healthcare or tax policy, much less bringing about a political revolution. They wanted one thing and one thing only: to defeat Donald Trump at all costs.

Joe Biden decided to seek the presidency in the aftermath of the Unite the Right rally in Charlottesville, Virginia. He promised to restore character and decency to the White House and heal the country after four years of bitter division. He offered Democrats a politically moderate, demographically low-risk (i.e., older white male) candidacy bolstered by strong poll numbers against Trump and the good will engendered by eight years as Barack Obama’s right-hand man. Other candidates had more buzz, more inspiring platforms, and stronger debate performances, but the Biden campaign bet correctly that most Democratic voters would forgive all of this if he could convince them of his electability. Biden’s nomination was not a foregone conclusion, and for a few weeks in February of 2020 it looked as if Democrats might get behind the far more revolutionary candidacy of Bernie Sanders. But by early March the party faithful had coalesced around Biden and before long his nomination was assured.

Democrats decided on a candidate but they never decided what kind of party they wanted to be. The big ideas were shelved and the soul-searching was postponed indefinitely. Instead, they focused their efforts on the singularly important task of defeating Donald Trump. To Biden’s tremendous credit, he delivered. Though the margin was considerably closer than the blue team had hoped for, Biden rode his message of character and unity to an electoral college victory. But this message came at a cost.

At the core of Joe Biden’s campaign was the idea that Donald Trump is an aberration from the great bipartisan tradition of American politics. This message implicitly cast Trump as separate from other Republicans and made those Republicans out to be decent enough people. Biden reinforced this message by playing up his own unique ability to work with political adversaries such as Mitch McConnell. Again this painted an unhelpful picture of Republicans as statesmen willing to compromise for the good of the country. The narrative worked well enough for Biden’s prospects but at the cost of letting the most dangerous Republican Party in American history off the hook. With messaging like this, it’s little wonder so many Americans voted for divided government.

Joe Biden’s campaign did little to lift the Democrats down ballot, but the Democratic Party didn’t do much to help itself either. In what should have been an all-hands-on-deck year of record voter registration and get out the vote efforts, the party significantly pulled back its in-person voter outreach because it didn’t want to confuse its messaging on Covid-19. Instead, the party confused its messaging on whether it has any interest in winning elections. The party failed to articulate a meaningful agenda aside from being anti-Trump, and it failed to take Republicans to task for their damning record of treachery, corruption, and failure. Instead, in this most momentous of American elections, Senate and House candidates ran on such insultingly vacuous ideas as “access” to healthcare and “following the science” on climate change. Most of them lost, and they deserved to lose.

There must be a better way. Surely the Democrats have the capacity to defeat a historically disastrous Republican Party all the way down the ballot while also championing a popular humanitarian agenda. If not it’s going to be a long and agonizing slide into the abyss. I’m not sure how many more of these victories the Democratic Party can take.

Running the most palatable and bland candidate the Democratic party had was a trade worth making to get Trump out of office. But you're right that this formula will not continue to hold for the years to come. We need exciting candidates who stand for bold positions.

And while there is something extremely pragmatic about picking someone who is known for bipartisanship (especially now as its looking like the senate will likely remain controlled by the Republicans), working across the aisle now lends respectability to a party that has lost the right to it.

Is it yet another bitter pill we have to swallow to have Biden attempt to work with Mitch McConnell by acquiescing to his demands? Or better to fight? That is what everyone will be watching the Democrats do next on the national stage.

Let’s not call it quits yet. We are looking at 2 runoffs for the Senate in Georgia. We can choose to watch to see what Mitch does next or we can do our best to send him packing.

Both of the GA Dem campaigns are in need of money. Money isn’t all they need. They could use volunteers to register voters, make phone calls and canvas. I’ve been watching the paint peel off my walls since early March. Those of us at higher risk could use our time to make calls from the safety of our homes. It’s not over yet.