Al Gross of Alaska, The Left-Leaning Independent Who Killed a Grizzly

Some liberals are going to hate this photo because of its echoes of the Trump progeny posing with large African trophies. Photo ops with large dead animals that were killed for sport have become anathema in many quarters. But in this Alaskan case, candidate for US Senate Al Gross shot the bear in self defense. It was charging him and another hunter in an apparent ambush attack. Which produced an Alaska Department of Public Safety investigation and report. 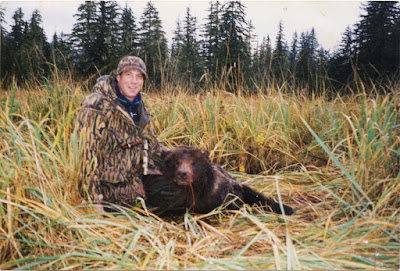 I felt the need to know more about Al Gross after The Cook Report moved the race from "Solid Republican" to "Likely Republican," and national media began to pay attention to the left-leaning independent whose current polling suggests the possibility of a sleeper win in one of the most Republican states in the Union. Gross is running against one-term Republican Dan Sullivan, who's a transplant from Ohio and who has failed to establish much of a profile through his six years in office (except that he's a loyal Trumpist).

Who Is Al Gross?

He grew up in a Democratic household. His father, Avrum Gross, was the Democratic Attorney General of Alaska and is still remembered apparently as one of the best. At the age of 14, Al bought himself a commercial fishing boat and went whole-hog into commercial fishing through his teens and into his 20s, earning himself the bankroll that it cost to put himself through college and then medical school. He became an orthopedic surgeon, married a pediatric doctor, and opened his practice in Juneau.

After almost 20 years in private practice, Al and his wife, "discouraged by how high health care costs were affecting Alaskan individuals, small businesses, and the Alaskan economy in general," took the unusual step of closing their practices to return to school for degrees in public health. Al has subsequently become an advocate for a public healthcare option to give Alaskans the choice to buy less expensive insurance through the healthcare exchange. He's also been an outspoken critic of the Trump administration's mishandling of the coronavirus epidemic.
I've been studying Al Gross's platform on his campaign website, and I find nothing that a registered progressive Democrat wouldn't agree with. Why he isn't running as a Democrat is explained by the demographics of "a little bit weird" Alaska: "Of its 585,000 registered voters, 58 percent are listed as 'nonpartisan' or 'undeclared.' Twenty-four percent, meanwhile, are registered Republicans, and only 13 percent are registered Democrats. Deep-red Wyoming has more Democrats...."
There's also an independent, Alyse Galvin, running for Alaska's single seat in the US House against long-time incumbent Republican Don Young, and she's doing quite well in polling. Al Gross and Alyse Galvin together present an enticing prospect of a major shift in Alaska, if the Blue Wave crashes with tsunami strength.
Posted by J.W. Williamson at 10/05/2020 08:45:00 AM
Email ThisBlogThis!Share to TwitterShare to FacebookShare to Pinterest
Labels: 2020 Blue Wave, Al Gross

The ice is melting.

"Killed hisself a bear when he was 33."
Another Davy Crockett for universal healthcare.
He's an orthopedic surgeon and public health physician to boot.