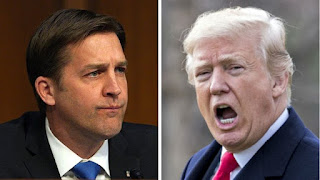 An audio recording surfaced of Republican Senator Ben Sasse (Nebraska) telling a group of supporters all the worst stuff about Trump, concluding, “I’m now looking at the possibility of a Republican blood bath in the Senate, and that’s why I’ve never been on the Trump train. It’s why I didn’t agree to be on his reelection committee, and it’s why I’m not campaigning for him.”

(The most interesting nugget of Sasse's laundry list of Trump's gnarliest failings? “He mocks evangelicals behind closed doors." Of course he does. He hates all that "laying on of hands" stuff.)

Twitterman has naturally hit back at Sasse with some truly awesome syntax: “The least effective of our 53 Republican Senators, and a person who truly doesn’t have what it takes to be great, is Little Ben Sasse of Nebraska...." etc. etc. He went on for several tweets to get his disdain fully expressed.

For the record, and when he could have done something about the human train wreck in the White House, Sasse voted not to hear witnesses at the impeachment trial and voted for acquittal. So I ain't sympathetic.

And, anyway, what does Trump's dump on Sasse amount to? Absolutely nuttin'. Sasse got through a May Republican primary easily (with Trump's support, incidentally), and he's running for reelection with weak Democratic opposition against Chris Janicek, "an Omaha baker," who's never held office and also ran unsuccessfully for US Senate in 2018 but lost in the Democratic primary. Nebraska Democrats have actually been trying to force Janicek off the ballot since June when a sexting scandal erupted about him (many men really do need to have their smart phones taken away), so last I heard, Democratic party leaders were trying to mount a write-in campaign for someone else. Write-in campaigns rarely work (pace Lisa Murkowski).

So Ben Sasse is going back to the US Senate, and he clearly thinks Trump is not staying in the White House or he would not have risked the Trump wrath by telling the truth about him.

Posted by J.W. Williamson at 10/17/2020 10:37:00 AM
Email ThisBlogThis!Share to TwitterShare to FacebookShare to Pinterest
Labels: Ben Sasse, Donald Trump