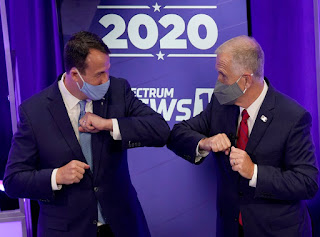 The "new right" website National File got hold of a text chain between Senate candidate Cal Cunningham and a married woman in California with whom he's been having some sort of consensual affair, and they headlined it -- "EXCLUSIVE" -- as though it was Bill-Clinton-level sex. The News and Observer amplified that news this morning. It's not Bill-Clinton-level. It's more like high school confidential.

But ... shittal! The stupidity frosts my berries. And as a politico, I don't want to see this kind of personal, private crap this close to an election, especially one that Cal is supposed to win. May still win, because after all ... so what? Consensual, private. Yes, a breach of trust and some ripe dumb shit, as Cal the candidate immediately copped to in a press statement last night:

“I have hurt my family, disappointed my friends, and am deeply sorry. The first step in repairing those relationships is taking complete responsibility, which I do.”

So ... facepalm time, and a nagging dread of voter backlash. What are the odds on Cal's still winning the Senate seat? Depends on whether suburban women decide to make an example of him. He betrayed his wife. But his embarrassing text messages aren't comparable to a Bill Clinton sexcapade, or even a Newt Gingrich affair. Clinton smelled of predation, Gingrich of neediness. As far as Cal's adultery, it looks more like coltish hormones set at liberty in a pasture where other coltish hormones also roam. Her texts are even more romantically aggressive. So it was mutual lust. Is lust a killing offense?

Betrayal is not the last and only word about Cal Cunningham. He has other solid human qualities. Also strategic political importance. His ascent as a 2020 candidate, along with the math of the US Senate, makes him an essential player in the restoration of the Republic. This scandal does not IMO negate the key strategery of his vote in the Senate. Which means, O my brethren, he is weighed in the balance and found adequate.

Full disclosure: I contributed to his campaign, and I've already voted for him and would do so again.

Posted by J.W. Williamson at 10/03/2020 10:23:00 AM
Email ThisBlogThis!Share to TwitterShare to FacebookShare to Pinterest
Labels: Cal Cunningham

I agree and Cal will be get my vote on the first day of early voting. But Lord have mercy I am so eternally tired of having to vote for adequate white men.

Arlene (Cal's girlfriend) is a marijuana lobbyist and has a shakey marriage with a disabled, retired Army sergeant, who was deployed often. Jeremy had a parachute failure and had to rehabilitate (learn to walk again), so she supported him as he worked on an MS in business. They have an 8 year old son and a younger daughter and live in Chino, California. Arlene travels to NC for her job, so Cal expected to have a tryst. Reminds me so much of John Edwards, though Edwards denied the truth for a long while, and may have fathered a baby. Apparently they were at the lust stage and had not yet had any bed time, still talking about kissing.

Pitiful, just pitiful. And now Cal is trying to pave over the pothole. Most male politicians I have known have this conquest trait, and it's sex addiction (ego driven) that draws them to "public service." Cal is typical, and also careless. Maybe his vulnerability could help us keep him accountable for 6 years. Yep, I absenteed for him too, because Tom Tillis really is a corporate whore, maybe worse than his "Papa", Richard Burr. Maybe if we would support less flashy candidates like Erica Smith this wouldn't happen, although I'm not naive enough to believe teachers and reverends don't have sex drives and texting ability. For most immature minded NC women voters Cal's libido show might make him more attractive.