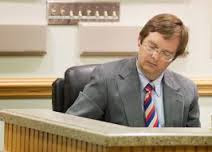 No reason was given for the swift about-face on the appointment, but in a statement, McLamb alluded to abuse allegations made against him.

"These anonymous allegations were launched against my character just hours after I was appointed to a partisan role that could have national implications," he said. "As a general rule, I do not respond to anonymous attacks, but let me be very clear, I never assaulted anyone or forced anyone into unwanted actions. I’m fortunate to have dated smart, successful women, and all of my relationships have helped to make me a better person." [Matthew Burns]

That left two other names nominated by the NCGOP: Stacy C. Eggers IV of Boone fame and Jeannette Doran, president and general counsel of the North Carolina Institute for Constitutional Law in Raleigh. Smart money says it will be Four who'll now become one of two Republican obstructionists on a board dominated by Democrats.

Posted by J.W. Williamson at 10/08/2020 07:08:00 AM
Email ThisBlogThis!Share to TwitterShare to FacebookShare to Pinterest
Labels: North Carolina Board of Elections, Stacy C. Eggers IV

Finally, the state BOE will feature a Wataugan with integrity!

"A Wataugan with integrity." Hmmm. You're referring to Four Eggers, the man who got a front-page expose in the Winston-Salem Journal in 2013 for ghost-writing all his younger brother's resolutions for the Watauga Board of Elections while simultaneously serving as the county attorney for Watauga. While also colluding with a Republican member of the State Board of Elections who subsequently had to step down from the board. Eggers was double-dealing the entire time, using his little brother like a puppet and doing his damnedest to suppress the student vote at AppState. So get outta here with your "integrity"!