Just in the recent past: 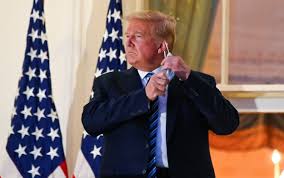 1. Trump rampaged through the 1st Presidential Debate, effectively signaling to his supporters -- "It's the election itself that is the threat to my power."

2. WASHINGTON — President Trump forced the State Department on Friday to commit to releasing at least some of Hillary Clinton’s emails before next month’s election, resurrecting a four-year-old issue in hopes that it would prove as helpful to his political prospects as it was when he defeated her in 2016. “We’ve got the emails,” SecState Mike Pompeo said. “We’re getting them out. We’re going to get all this information out so the American people can see it.” Neither Trump nor Pompeo explained why they would release the emails now, in the final weeks of a hotly contested presidential campaign, given that they could have done so at any point in the past four years.

FOOTNOTE: After careful consideration, I have made up my mind not to vote for Hillary Clinton in 2020.

3. Still recovering from his own coronavirus infection, Trump made plans to host hundreds of supporters on the South Lawn of the White House today for his first in-person event since he tested positive last week. The continued exploitation of national buildings/monuments for Trump's personal political benefit shocks the conscience. Trump will never pay a usage fee to the US Treasury for such exploitation.

4. The president appeared intent yesterday on creating an October surprise more to his liking (because the last one didn't work), in this case tarring Democrats by using the instruments of government power at his disposal. He publicly badgered A.G. William Barr: “Unless Bill Barr indicts these people [you know who he's talking about] for crimes, the greatest political crime in the history of our country, then we’re going to get little satisfaction unless I win and we’ll just have to go, because I won’t forget it,” he announced on Fox News, in what would constitute a presidency-destroying impeachable offense if any normal president had uttered it. “But these people should be indicted. This was the greatest political crime in the history of our country, and that includes Obama and it includes Biden.”

5. About John Ratliff, the former Texas congressman who now oversees Trump's secret services, and his very recent selective declassification of one-sided, unverified, and suspect raw intelligence: “He is doing exactly what the administration brought him in to do as [Director of National Intelligence],” said Joseph Maguire, whom Mr. Trump dismissed as acting director of national intelligence in February. Releasing raw intelligence is pure partisanship and a clumsy attempt to smear Hillary Clinton all over again.

6. The president has increasingly declared that the only way he could lose is if the election is rigged and therefore he can refuse a peaceful transfer of power because a loss would be a fraud. Simultaneously, Trump has sent implicit and explicit messages to far-right groups and random Trump supporters (the ones with a lot of guns who want to swagger around with them) to "watch" polling sites (intimidate voters). He famously told the Proud Boys, a far-right extremist group, to "Stand back and stand by.” Other Trump functionaries are well disposed to carry out voter suppression where they can: One Trump campaign official recently emailed party officials in North Carolina and told them “to not follow the procedures outlined” in a memo sent out by the state Board of Elections.

7. Thirteen people were charged Thursday in an alleged domestic terrorism plot to kidnap Michigan Democratic Gov. Gretchen Whitmer. The scheme included plans to overthrow several state governments that the suspects “believe are violating the US Constitution,” including the government of Michigan and Whitmer. How did Trump throw gasoline on this smoldering ember? Like this: “Governor Whitmer of Michigan has done a terrible job. She locked down her state for everyone, except her husband’s boating activities,” Donald Trump thundered on Twitter shortly after Whitmer appeared on CNN, where host Chris Cuomo took aim at his rhetoric for inflaming her would-be killers.
Posted by J.W. Williamson at 10/10/2020 10:16:00 AM
Email ThisBlogThis!Share to TwitterShare to FacebookShare to Pinterest
Labels: Donald Trump

p.s. I'm not voting for Hilary this time, either.