'Herd Mentality': Trump Wants You To Get COVID Too! 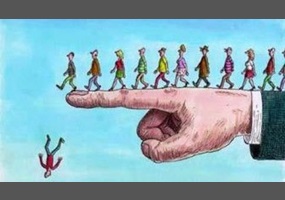 When Trump jokes on stage at one of his rallies that he wants to kiss all the men and all the pretty women -- he's promoting, either intentionally or subconsciously, his recently acquired doctrine of "herd immunity." It's a dangerous theory promoted by medical quacks and anti-government zealots.

Trump brags that he's now immune to COVID. Maybe he is. Maybe he also doesn't have any of the COVID-caused long-term medical problems seeded in his carcass, like a weakened heart. Claiming an actual physical affection for his crowds (that he obviously doesn't feel) -- I'm gonna kiss alla yew! -- Trump sets himself up as Patient Zero, ready to share. That's also why he said the virus is "a blessing from God." Come get yours. It'll save your soul. And the epidemic will go away soon, like the dew of a morning.

He gets this theory about herd immunity -- which he hilariously called "herd mentality" in a TV interview -- from a former Stanford University radiologist and ultra libertarian named Scott Atlas who came to political prominence by being vocally anti-Obamacare. Don't know how he came to Trump's attention, though one avenue might have been via Rudy Guiliani. Atlas was a medical advisor on Guiliani's 2008 presidential campaign. When he got to the White House recently, shoving Dr. Anthony Fauci into a nearby closet, Atlas whipped out some printing, a document called "The Great Barrington Declaration," for a president who doesn't read, so we imagine Dr. Atlas briefing Twitterman like this: "If we open up all the bars and the gyms and the theaters, let all the young people loose again, they'll actively spread the disease and only rarely get a little sick, and pretty soon the epidemic has no available hosts, and the economy will boom again." Libertarian freedom at its edgiest.

The Great Barrington Declaration was written by three doctors from prestigious universities, including one of Atlas's Stanford colleagues, arguing that COVID does not require economic lockdown (and probably not face coverings either) because the key to survival is getting as many young people infected as possible -- while old people and colored people better stay at home. The virus will die out after many people become immune. (Uh, when will the old and colored people get to come out of hiding? Ever?)

"The Great Barrington Declaration is not a scientific document .... it presents no data. It has no footnotes, few specific suggestions for how to implement the societal segregation and, unlike most scientific arguments, does not discuss potential objections to the proposal." [Joel Achenbach]

Some 78 of Dr. Atlas's other Stanford colleagues ("infectious disease physicians and researchers, microbiologists and immunologists, epidemiologists and health policy leaders") published a document denouncing "the falsehoods and misrepresentations of science recently fostered by Dr. Scott Atlas, a former Stanford Medical School colleague and current senior fellow at the Hoover Institute at Stanford University. Many of his opinions and statements run counter to established science and, by doing so, undermine public-health authorities and the credible science that guides effective public health policy."

Nevertheless Trump has jumped on the deal like a real estate plum. He's playing it out with gusto. Look at his new lust for big rallies. He's gambling with our lives because he never had a plan for dealing with this epidemic anyway, and he's desperate to get an upper hand. Plus we know he doesn't give a good goddamn about anybody else in the universe but himself.

Posted by J.W. Williamson at 10/14/2020 10:07:00 AM
Email ThisBlogThis!Share to TwitterShare to FacebookShare to Pinterest
Labels: Donald Trump