There's Only One Issue in This Election

So Trump benched the actual doctors and scientists who know something about pandemics and how they spread, about the same time that Dr. Scott Atlas, a radiologist, joined the White House's Coronavirus Taskforce and began telling Trump that the real response to the disease ought to include infecting as many healthy people as possible -- herd immunity, dontcha know? Rarely has a harebrained theory better fit the predisposition of a dumb, lazy leader whose own inclination is to deny everything and simply ignore a wildfire that is hitting a third distinct peak with over 80,000 new infections daily.

Ignore and facilitate the death rate. That's the two verbs of the Trump regime.

The trend-lines depicted above go from March 1, where it's totally flat, to October 20th, a few days ago. The blue line is Metro areas. The red line is rural areas. [More discussion of the graph in the NYTimes]
Jee-bus.
The Quest for Herd Immunity, Boone-style, last night at a local bar/restaurant -- recorded video by The Appalachian's star reporter Moss Brennan (go look for yourself. My attempt to embed the video here went haywire).
The adult (😜) version of that shit-for-brains behavior: 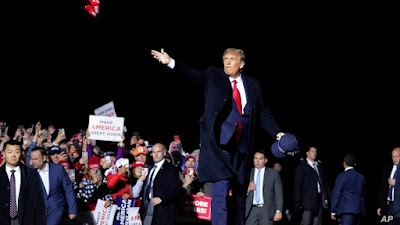 It's verifiable that the places where Trump holds rallies subsequently experience spikes in COVID cases. For example, a total of 23 COVID-19 cases were traced to two rallies that Trump held in Minnesota in September. "A separate analysis of new coronavirus cases from counties in which Trump held campaign rallies between late June and late September found that there was a surge in COVID-19 cases in seven of the 14 cities and townships where Trump held rallies" (Daniel Politi).
Those newly infected Americans can do as they please, and they will, but unfortunately, they become a threat to the rest of us who are treating the pandemic with respect. They don't worry about their own health, and they certainly don't worry about anyone else's health. In fact, some of them glory in pretending to cough on people wearing masks. It's performance art from the Theater of Cruelty.
Why would they want four more years of it, when they may not survive the next six months? 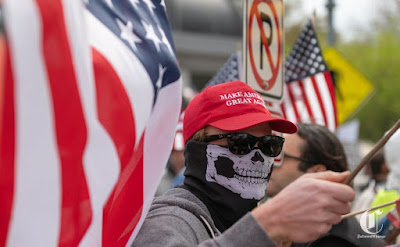 Posted by J.W. Williamson at 10/25/2020 10:06:00 AM
Email ThisBlogThis!Share to TwitterShare to FacebookShare to Pinterest
Labels: Donald Trump

Why do we need Islamic extremists when the Trump bunch is bringing us "Death to America!" Not an original thought for me, but one that defined what we're up against this year.

My goodness, but manners have eroded in the Appalachians since I used to travel there in my youthful years to scope out my ancestors' places.

I guess I can only reply that regarding

it takes one to know one.