'Anonymous' Is Anonymous No More

Remember the famous anonymous op-ed published in the New York Times in 2018, "I Am Part of the Resistance Inside the Trump Administration," which later became a book titled "A Warning" by Anonymous?

Boy, I do. Those writings launched a whole cottage industry of speculation: "Who is Anonymous?" VP Mike Pence denied he wrote it. Ditto Mike Pompeo. DNI Dan Coats denied it but was forced out anyway. Someone, possibly on drugs, suggested that TreasurySec Steven Mnuchin wrote it. Homeland Security Secretary Kirstjen Nielsen got fingered for it and denied it via her press secretary. Maybe SecDef Jim Mattis. Hilariously, maybe even Rick Perry, who is only tenuously literate. Kellyanne Conway, Wilbur Ross, Nikki Haley, Betsy DeVos (hahahaha!), Ben Carson, Mick Mulvaney, Veterans Affairs Secretary Robert Wilkie, disgraced Secretary of Labor Alex Acosta, CIA Director Gina Haspel, White House counsel Don McGahn, and many others made the cut and were forced to deny it because Herr Trump was watching. 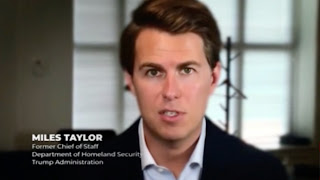 Turns out "Anonymous" was Myles Taylor, chief of staff at the Department of Homeland Security, so the closest anybody came to the truth was suggesting Kirstjen Nielsen, for whom Myles Taylor worked. He was in and out of the Oval Office and in meetings with Trump constantly. He absorbed his boss's knowledge and pain, since Nielsen was fired from the job for resisting "some of Mr. Trump’s demands — including shutting down the border with Mexico and shooting people crossing the border illegally in the legs to slow them down" (Michael D. Shear).

As one of Ms. Nielsen’s top advisers, Mr. Taylor was part of the administration during some of the most controversial decisions of Mr. Trump’s first three years in office, including the ban on travel from predominantly Muslim countries, the decision to separate immigrant children from their parents at the border and the efforts to turn back asylum seekers.

Nielsen was fired in April 2019. Taylor left government soon after in June of that year.

Taylor is a moral hero. I don't care that he blew the whistle anonymously. I don't care that he comes out of the closet now, so close to the election. He was the first to say something's bad wrong with the strange man in the Oval Office. His was the first Molotov cocktail hurled over the wall in what became a blizzard of bombs, both Trump's astonishing subversion of ethics and morality, the revelations followed by placid, grazing cow satisfaction from his supporters (whom we all fear now like working scissors in the hands of a running toddler). Years later, after so much chaos, we can barely remember "I Am Part of the Resistance."

Taylor is also a calculating operator, and I respect that. He's an ideological conservative and deeply partisan. He says in his published confession, "...former Vice President Joe Biden is likely to pursue progressive reforms that conservatives oppose (and rest assumed, we will challenge them...)." He decided on anonymity out of pure tactical necessity: Trump was already well known as a vicious insulter of people he wanted his followers to hate as his enemies and enemies of the State. Blind hatred became the only reality. Taylor correctly calculated that his inside revelations about a man too clueless to rule and too corrupt to abide would get lost if he signed the op-ed. He knew that he would personally become the battered beachball for Trump and his social media tribe while his great concerns about a government going off the rails would be ignored.

He was right. He was strategic, which is what we all have to be as the Republic circles the drain.

Posted by J.W. Williamson at 10/29/2020 11:35:00 AM
Email ThisBlogThis!Share to TwitterShare to FacebookShare to Pinterest
Labels: Donald Trump, Miles Taylor