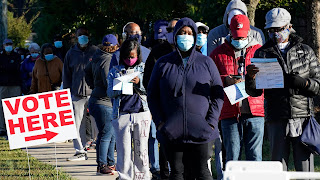 I'm indebted to Jeffrey Billman's new PRIMER/North Carolina (and see below about Billman's valuable fresh contribution to your appreciation for hard news), who's indebted to political scientist Michael Bitzer, for the following early voting statistics from North Carolina (through last Saturday, October 17):A total of 1,433,772 votes had been cast in North Carolina as of the close of business on Saturday, counting both Absentee By Mail (ABM) and Absentee One-Stop (in-person voting). That number equals 20% of registered voters in the state and 46% of the total number of absentee voters in 2016 (46% of the 2016 vote in only the first three days of early voting, holy cow!).
By party:

Important: 22% of these votes — roughly 308,000 — came from people who either didn’t vote in 2016 or registered afterward.
Burning questions and snap assumptions proliferate in my brain as I peruse those numbers -- like Unaffiliated voters out-voting Republican voters, let alone the surging turnout of Democrats -- and the lagging performance of Gen X, Millennials, and (yikes!) Gen Z (sort yourselves out, kids!) -- but beyond that I'll leave you to your own private cogitations.
Now, about the estimable Jeffrey Billman and his daily, free newsletter (though you can also subscribe, which I did, which gives you more, including access to the archives). Billman used to edit the Indy Week in Durham and produced a daily newsfeed which I would devour and often steal from, but he's gone fully independent, and I'm all for supporting the work of independent news sources when so many newspapers are going caput. Here's how Billman describes his labor of love:

If you’re trying to figure out what this newsletter is about, think of it like this: Imagine your news-junkie friend obsessively consuming media from the Triangle, North Carolina, and across the country, boiling down all of the essential stories to their core points, putting things in their historical and political contexts, and giving you the rundown while you have your morning coffee.

Suits me! You can join him on Facebook, where you can also sign up for the free daily newsletter or go further like I did and throw a little money his way. He's already become essential reading for me.