The (Flying) Fickle Finger of Fate 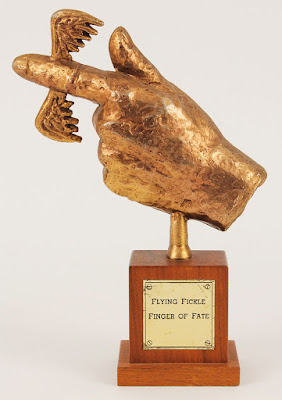 A few of his greatest hits:

"It's going to disappear. One day — it's like a miracle — it will disappear."

"It affects virtually nobody. It's an amazing thing — by the way, open your schools!"

Biden’s mask-wearing as a weakness to be ridiculed: “Did you ever see a man who likes a mask as much as him? ... because, you know what, it gives him a feeling of security. If I were a psychiatrist, I’d say: ‘This guy’s got some big issues.' ”

At the Presidential Debate Tuesday night: “I don’t wear a mask like him,” Trump said, gesturing toward Biden. “Every time you see him, he’s got a mask. He could be speaking 200 feet away from him and he shows up with the biggest mask I’ve ever seen.”

I'm weak on hating usually, but considering Trump's lies and crimes and selfishness, I think both we and he would find his death an improvement. I thought about jail, but who needs the expense? Pence can't match Trump's destruction rate, and it's only 3 months. The bonus would be the disorientation of Trump's racist mobs. I hope they're tussling like the 3 stooges already.