Oh, Watauga GOP! You're So Predictable 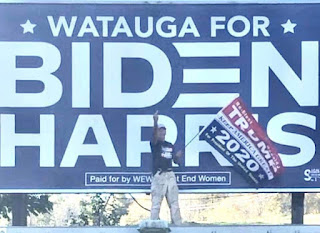 Anne-Marie Yates, who is once again the chair of the Watauga GOP, has filed election law complaints against two local groups who put up billboards, an absolute right they have to express a political opinion. It's the same right Anne-Marie Yates has. (The same right the guy up on the billboard has, though he may have violated some private property rights to express it.)Yates was maybe reacting to the rumor that West End Women were actually a bunch of Antifa-adjacent, possibly Soros-financed, pro-abortionists out in the vast Western stretches of the country, like maybe in Nevada: “These shadow groups are funneling dark money into our local elections, and the voters deserve to know who is funding these advertisements,” said Yates.
Who is funding those billboards are two separate groups of Watauga County concerned citizens who raised the money among themselves. For the West End Women, no one contributed more than $200, which would be the threshold for itemizing their names on the FEC report, which isn't due until after the election. The expense of renting the billboards is considered an Independent Expenditure and is perfectly legal. And commendable, as a matter of fact, since the Trumpists in Watauga can't abide the sight of a Biden/Harris yard sign.
Despite the heavy breathing of professional hall monitors in the Watauga GOP, political activism and free speech are still viable options for ordinary citizens.
Posted by J.W. Williamson at 10/21/2020 09:15:00 AM
Email ThisBlogThis!Share to TwitterShare to FacebookShare to Pinterest
Labels: Anne Marie Yates, Donald Trump, Joe Biden, Watauga County Republican Party

They are nothing if not predictable! On another note, did y’all see the letter in the High Country Press from everyone’s favorite gadfly, Karen Carter? Now apparently the people running for Board of Commissioners are all socialists. 😆