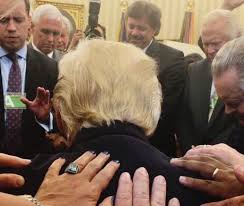 Well, of course I'm gonna read an article headlined "Slipping Christian Support for Trump." Holy cow! They've seen the light? Well, some, a few, especially in the suburb/exurb neighborhoods around big cities. The article turned out to be about Durham and a group of Christian activists calling themselves "Vote Common Values."

So ... slipping Christian support for Trump? Yeah, maybe, but I have my doubts out here in my rural world. It's surprising, really, for a boy who grew up on a farm in West Texas and attended faithfully a Pentecostal church and who went on to a Southern Baptist college in a little West Texas town and attended Chapel three times a week -- astonishing that so many rural Christians thank God for Trump. Full stop. Thank God that He sent them this raving apostate as the Protector of Their Faith. (Donald J. Trump, who has admitted that he despises the rubes who lay praying hands on him.)

Where I grew up in West Texas, there was aggressive evangelism and there was First Baptist Church establishmentarianism. Assertive "Love Thy Neighbor" style Christianity was really, in that setting, the zygote of bleeding-heart liberalism that had not yet emerged and found a political outlet. Bleeding-heart Christian liberalism at a Baptist college sometimes embraced local mission work of the most basic "helping hand" good deeds, and sometimes veered into ecstatic mysticism -- which was frowned on and therefore, irresistible -- and was always a fertile seed-bed for eventual anti-war anti-establishmentarianism.

My first political thought came with the thunderbolt of a devout Christian named Norman Morrison, the 31-year-old Quaker, pouring kerosene over his head in front of the Pentagon and setting himself on fire on November 2, 1965. I was a senior at Wayland Baptist College. Morrison's self-immolation shook me to my core, because I had studied the Christian faith as a source of personal courage in the face of persecution. I had read the handbook, Fox's Book of Martyrs, so Morrison's horrific death made me think new thoughts about what my government was doing and how it didn't gibe with any Christian values I was following. That's where it started: that self-martyrdom of a devout Christian made me measure my courage and my commitment to opposing official cruelty. 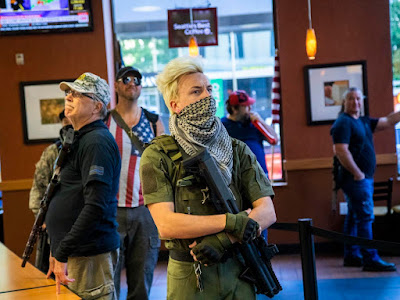 I even wrote a poem about Morrison, which is luckily for anyone reading this, long lost.)

The country people I have known, grew up among, am surrounded by now in a rural Western NC county, are the sweetest people on earth. Non-confrontational, slow to wrath, respectful, deferential, and instantly aligned with the underdog. The rural Trumpsters who parade their big Trump flags and their Confederate battle symbols on the backs of their giant trucks and love to speed through town and harass people with Democratic stickers on their cars -- those are not representative of the country folk I knew and know. The guys in camouflage armed with automatic and semi-automatic weapons, who give in to a craving for Subway for lunch -- these are the bullies we all knew, the few in every place who somehow replaced the basic sweetness of rural humanity with an insecurity that apparently lusts for violence -- at least some shoving -- to prove itself.

God will judge us, O my brethren, for our sins of omission.

Posted by J.W. Williamson at 10/20/2020 10:33:00 AM
Email ThisBlogThis!Share to TwitterShare to FacebookShare to Pinterest
Labels: Donald Trump, religion and politics