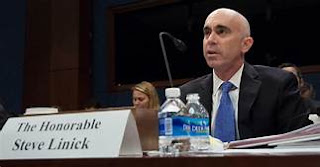 President Donald Trump announced late yesterday that he was firing State Department Inspector General Steve Linick. The executive branch is required to notify Congress 30 days ahead of time if it intends to remove an inspector general.

Congressional insiders say that Linick had opened an investigation of Secretary of State Mike Pompeo, and Rep. Eliot L. Engel (D-N.Y.), chairman of the House Committee on Foreign Affairs, said "Linick’s firing amid such a probe strongly suggests that this is an unlawful act of retaliation."

A Democratic congressional aide said Linick had launched an investigation into Pompeo’s alleged misuse of a political appointee to perform personal tasks for him and Mrs. Pompeo. The State Department did not respond to an inquiry about the allegation.

Linick played a minor role in the House of Representatives' impeachment proceedings against Trump, ferrying a trove of documents to lawmakers that had been provided to the State Department by Rudy Giuliani, the president's personal lawyer.

A State Department spokesperson said that Amb. Stephen Akard, a former career Foreign Service officer and "an ally of Vice President Pence," will now lead the Office of the Inspector General at the State Department in an acting capacity.