Inside a Religious Cult in Spindale, NC


Just finished reading "Broken Faith: Inside the Word of Faith Fellowship, One of America's Most Dangerous Cults" by investigative reporters Mitch Weiss and Holbrook Mohr. It's a deep-dive into the Rutherford County church run by the authoritarian preacher-lady Jane Whaley who claims that she -- and she alone -- gets direct messages from God. Unfortunately, many of those messages contain revelations that various demons infest members of her church -- especially the men and boys -- and God requires verbal and physical abuse to exorcise them, what the church calls "blasting."

You know who never gets blasted: Jane Whaley.

The experience of Jamey Anderson, who escaped the church at the age of 18 and who subsequently put himself through law school, informs some of the book. I found this Associated Press interview with Anderson that will give you a 3-minute primer on the particular predatory nature of the Word of Faith Fellowship:

I too grew up in a charismatic, Pentecostal church and knew a female preacher very much in the Jane Whaley mold -- fiery, controlling, scary-as-shit. I know about that particular brand of mind control and can remember to this day my own personal guilt when she yelled that I was going "to split hell wide open" because I watched TV. It never got to physical abuse, but the mere threat that The Rapture could occur at any minute and catch me out kept me very much in line. Until I went to college. Who could have guessed that a Southern Baptist College would free me from those mental shackles?

I was very interested in the political power that the authors of "Broken Faith" claim Jane Whaley holds in Rutherford County, particularly within the law enforcement community which had consistently failed to investigate child abuse and false imprisonment charges. The church even sued the Rutherford County Department of Social Services in 2005 to prevent social workers from poking into church practices. The resulting settlement of that case left law enforcement essentially "toothless" to investigate the welfare of children in the church. 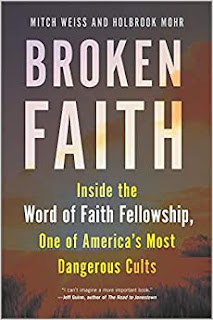 In February 2017, the AP ran the first in a yearlong series of investigative stories that exposed extensive abuse in the World of Faith Fellowship. Violations include brutal beatings, children routinely wrested from their families, and a pipeline of young laborers brought from Brazil and forced into virtual slavery in North Carolina -- all perpetrated in the name of Jesus Christ. The AP disclosed how businesses owned by church leaders came up with a fraudulent unemployment scheme to pay workers -- and keep their tithes flowing in -- during a major economic downturn [2008?].

These stories revealed widespread institutional corruption and incompetence that allowed the church to escape serious charges. At least six times over two decades, authorities investigated reports that church members were being beaten. And every time, orders came down from Jane Whaley: witnesses must lie to protect the sect.

The AP investigation showed that lawyers Frank Webster and Chris Back were among the Word of Faith Fellowship members who coached congregants and their children on what to say to investigators. Webster and Back -- assistant prosecutors for three counties nearby the church -- provided legal advice, helped at strategy sessions, and participated in a mock trial for four congregants charged with harassing a former member.

After the stories ran, Webster and Back were forced to leave their jobs. No criminal charges were filed against them.

The AP reports brought to light several other criminal actions and enterprises.

Three church leaders, including Kent Covington, entered guilty pleas in May 2018 for their roles in the unemployment scheme that lasted between 2008 and 2013. The charges carry a maximum penalty of thirty years in prison and a $1 million fine. A fourth pleaded guilty a year later.

And in late April 2019, Covington was sentenced to thirty-four months in prison and ordered to pay $466,960 in restitution for his role in an unemployment fraud scheme....

Jane Whaley was not charged in the case, but survivors considered it a promising development when court records named her as a coconspirator, someone who "promoted" the illegal activity....

There's more, much more, including the claim by the Rutherford County Republican Clerk of Court that a man was hired to murder her and another sudden, unexplained suicide by a critic of the church.

In December 2014, five church members were finally indicted on charges of assaulting church member Matthew Fenner -- trying to beat "the homosexual demons out of him." One of those -- Jane Whaley's number one disciple and "the daughter of wealthy Kansas farmers," Brooke Covington -- was the first to face trial in 2017. That court proceeding ended in a mistrial when a juror was arrested for bringing "unauthorized documents" into the jury's deliberations. The charges against Brooke Covington and the other four defendants in the beating of Matthew Fenner are still pending.

Even though the Republican Clerk of Court in Rutherford County proved to be a thorn in Jane Whaley's paw -- and she did die a sudden and mysterious death -- the church has been a big supporter of Republican Dan Forest, running for governor this year, and of Congressman Mark Meadows, who is currently wearing a mask in the White House. They're also very enamored of Trump, whose FAKE NEWS mantra fits the church's response to all the criticism coming its way.

I have one big complaint against "Broken Faith" -- no index.

If you want more on this weird church, John Huddle, who had to leave his wife and children to escape the church in 2008, has a very built-out blog site where he posts much information on the Word of Faith Fellowship and on other religious cults: http://religiouscultsinfo.com.

Posted by J.W. Williamson at 5/12/2020 11:26:00 AM
Email ThisBlogThis!Share to TwitterShare to FacebookShare to Pinterest
Labels: religion and politics

416 pages is a thick book: Thanks for your service, Mr. Williamson.
I suspected you'd busied yourself with something informational these last chilly May days.
I'm taking your word so will not need to read this book.
Most of us who've been around evangelical and fundamentalist Christian religion know this scenario well.
I've been rubbing my hands with glee every time I pass one of these little cult places during restrictions,
thinking how egoist preachers are starved for tithes.

I consider Trumpservatism a cult because criminals win and fools pay, bad faith and racist hatred, jealousy of legitimate competence, contentment or solid achievement. A lazy and stupid insane President may kill us all.

Oh, which Baptist college assisted your development? It deserves repeating.