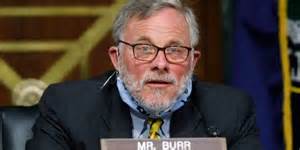 The Los Angeles Times broke the news last night (their site is protected by a paywall, so I'm relying on a secondary source) that Sen. Richard Burr surrendered his cell phone yesterday when the FBI served a search warrant at his Washington home. The G-men are investigating "whether Burr used information he obtained as chairman of the Senate Intelligence Committee to sell a significant share of his stocks before the coronavirus outbreak upended the markets."

Apparently, there was a previous (first) search warrant that was used to collect information from Burr’s iCloud account. Some of the data collected from Apple was then used as evidence to obtain the warrant for Burr’s phone.

"Burr was one of just three senators who voted against the Stop Trading on Congressional Knowledge (STOCK) Act, which extended insider trading regulations to U.S. senators and representatives. At the time, he called the legislation 'ludicrous.' ”

“This is a very, very big deal,” Preet Bharara, the former U.S. Attorney for the Southern District of New York, tweeted Wednesday night. “This is not something the FBI or DOJ does lightly. It requires layers of review, the blessing of a judge, and consideration of severe reputational harm to a sitting US Senator.”

"A search warrant indicates that investigators were able to show to the satisfaction of a federal judge or magistrate probable cause to suspect a crime occurred and an expectation of the search yielding evidence."

So if a serious investigation of Richard Burr's activities are underway, one wonders what's going on with the similar stock-dumping accusations against Sen. Kelly Loeffler (R-Ga.) and for that matter the accusations against senators Dianne Feinstein (D-Calif.) and James M. Inhofe (R-Okla.) that date from the same time.

Some people are already forecasting a resignation for Burr and two, not one, US Senate seats on the ballot in North Carolina in November. I'm maybe more interested in the conspiratorial suggestion that Trump's grudge against Burr, for once upon a time subpoenaing Donald Trump Jr. in the Russia investigation, has motivated his handmaiden at the Department of Justice, William Barr, to send the FBI against Burr.

Many assume Burr has a law degree (and he will never correct those who claim it): Just a good old boys bachelors from Wake Forest (1978). He was a spoiled frat boy in the last wave of grit bullies, a third string football player. He was a lawn and farm equipment salesman for about 20 years trading favors and debaucheries within his privileged class circle near Winston-Salem.
He came into the House on the Reagan wave and into the Senate on the Gingrich Revolution. You could have predicted all this from a guy who pledged a fraternity with Jefferson Davis as a role model.

His voting record is routine for a reptilian throwback. In 2008 he bragged about his "run on the ATM bank" to withdraw every cent before the country collapsed. And now he has made good his promise (from that time) to do it again at first opportunity.
But as he did he forewarned his old social circle of contributors about what he knew as Chairman of the Senate Intelligence Committee. What a paragon, what a public servant, what a Trumpservative, always paving our road to Fascism.