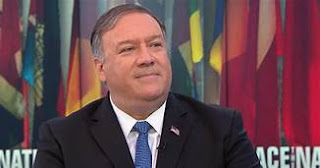 It's out this morning that SecState Mike Pompeo asked Trump to fire his department's inspector general, career official Steve Linick, and Trump was only too willing to do so. Linick was investigating Pompeo's frequent use of department resources for his personal comfort, like his frequent trips back to Kansas using State Department funds and aircraft, perhaps to explore a run for the US Senate, and like taking his wife with him on many official trips abroad, and like using diplomatic security personnel for personal errands. None of that appears to have caused the inspector general to open the investigation that got Pompeo's panties in a wad.

But this did: "...Mr. Linick had been looking into whether Mr. Pompeo improperly used a political appointee at the State Department to perform personal tasks for him and his wife." That's what we know. The details have yet to come out, which they will, and then maybe it'll be Mike Pompeo's turn to jump.

What am I saying! There is no accountability in this government, and no one takes personal responsibility. It's a corrupt government with corrupt people led by an evil, self-gratifying liar-in-chief.