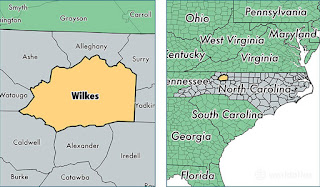 According to a joint press release issued by the mayors of Wilkesboro, North Wilkesboro, and Ronda, "The number of [COVID-19] cases in the county has jumped nearly 3,000% in the last two weeks," with two particular hotspots at the Tyson chicken plant and at Wilkes Health & Rehabilitation (formerly known as Wilkes Senior Village).

The mayors amended their earlier "state of emergency" declaration to be in line with Governor Cooper's Phase 1 reopening plan, calling their new resolution a “modified stay-at-home” order that legally permits limited commercial activity as long as prescribed measures are in place to ensure social distancing and sanitation.

The three mayors made it clear that they "reserve the right to re-institute stricter protective measures should the situation warrant.” The governor's phased reopening allows for local jurisdictions to impose stricter rules.

Then there's this note, added in the Wilkes Journal Patriot, about an apparent lack of transparency on the part of Tyson: "The state doesn’t require that the number of confirmed cases at meat processing facilities be made public, but Wilkes County government officials have said cases tied to the Tyson complex in Wilkesboro account for the majority of Wilkes cases."

Bottomline: Outbreaks in meat plants and in nursing homes don't stay confined to those places, do they?

Posted by J.W. Williamson at 5/08/2020 09:34:00 AM
Email ThisBlogThis!Share to TwitterShare to FacebookShare to Pinterest
Labels: health care, Wilkes County