That headline above appeared on the WRAL website late yesterday, with this paragraph: 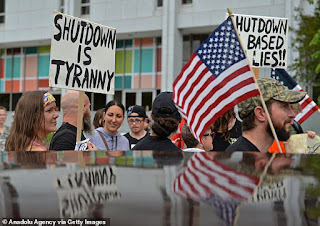 As of Tuesday, ... a nationwide collaboration [created by public health and crisis experts] tracking every state's progress toward recovery puts North Carolina in the red. That color-coded designation means it failed one of several "gating criteria" provided by the administration of President Donald Trump in its guidelines for "Reopening America Again."

Not that Donald Trump even knows what those guidelines are or gives a flip.


So far, North Carolina has hit benchmarks for low flu-like illness activity and sufficient hospital capacity. But it's the trendline for new cases, however, that scored the state the lowest on the project's three-color scale.

All signals from Raleigh suggest that Governor Roy Cooper is poised to accelerate reopening anyway, and he could make that announcement that we're going to Phase 2 today.

You know what local North Carolina government isn't going along with a hopeful, easier "unity" with "the neighbors"? Durham Mayor Steve Schewel has extended his stay-at-home order for the foreseeable future, which includes a continuing mandate for face coverings. Durham County ranks 13th in the state for positive COVID-19 cases with 29 cases per 10,000 residents. For deaths, the County ranks 19th in the state with 1.12 deaths per 10,000.


Schewel did not state how long the stay-at-home order would last nor did he go into specifically which guidelines or restrictions would be affected. He even offered a word to critics who say the order is too strict and the city should reopen sooner rather than later.

"There are some people who are just opposed to the stay-at-home orders, and I simply disagree with that. And I think that we've needed those orders .... Because our infection rate is so low ... it means that we don't have much immunity. And so, unless we are coming back with safe practices, it would be very easy for the COVID-19 cases to spike and to hit us very hard. We want to keep our community safe."

Word! Watauga County, too, has had a blessedly low infection rate, but our leaders seem vague about the equation that Durham Mayor Steve Schewel understands. COVID-19 cases are increasing in North Carolina. Why in the world would a responsible local government help that acceleration without requiring, say, face coverings at the very least?