Continue To Reopen NC? Can Gov. Cooper Stand Up to the Pressure?


Governor Roy Cooper has promised a decision by mid-week -- tomorrow? -- on whether he'll move to Phase 2 of his planned reopening, which according to the governor's own website would involve the following: 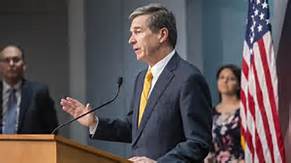 
Phase 2 was originally projected to run only a couple of weeks, starting this Friday, May 22, and extending (maybe) into the middle of June -- when, barring really bad news, we'll have the launching of Phase 3. Because surely by then every Trumpist will be thoroughly immunized by hydroychoroquine. Phase 3 will be a PAR-TAY for some, while the rest of us can eat our masks.

Last Saturday -- three days ago -- North Carolina experienced its biggest one-day jump in COVID-19 cases -- 853 new cases. Trumpists hurry to assert that the spike exists only because there's more testing. The state has ramped up testing with 275 new testing sites, managing about 7,500 screenings a day. But -- d'oh! -- more testing means more discovered infection. The logic for denial follows: no testing, no virus. Thus saith the Twitterman, in between chugalugs of hydroxychloroqine.

Such is the state of our national pandemic management. 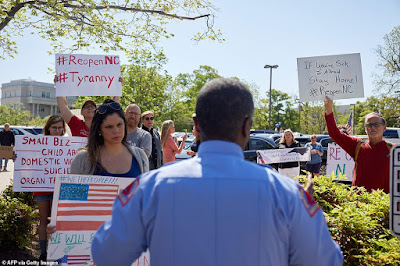 Meanwhile, North Carolina is reopening. The pressure on the governor has been staggering. Chambers of Commerce, always genteel, nevertheless grumble audibly. Ashley Smith's ReOpenNC militance threatens the governor with implicit violence, while young men with something to prove go theatrically armed about our capitol city. NC Republican Boss Phil Berger bitches from the sidelines, the man who can singlehandedly stop any bill for pandemic relief. While preachermen successfully find a federal judge to reopen the churches. Naw, no pressure at all.

But Governor Cooper can also play from strength, and should. According to a Meredith College poll, more than 75% of respondents supported Gov. Cooper's stay-at-home order, including "people from different political parties, all age groups, rural and urban communities and those with low and high incomes."  (While a more recent poll by Duke’s social science researchers found rising dissatisfaction with shutdown, that number -- 8% rise -- was offset by a 9% rise among respondents who believe that North Carolinians are underestimating COVID-19.) Strength? Cooper easily out-polls Dan Forest, the Republican choice to replace him, whose every attempt to make political hay out of Cooper's coronavirus management has turned to chickenshit. Jeffrey Billman at IndyWeek bills Forest as "an idiot," which seems a fairly generous assessment.

Are we flattening the curve? Yes, in some respects -- the select numbers that Cooper's being urged to pay attention to by re-openers rather than the steadily mounting number of new cases. As of Sunday, the number of days it took to double the number of infections had stretched to 20 days, as opposed to the 2-3 days for doubling in the first three weeks after the first COVID-19 case was confirmed in March. The rate of new cases, down. Total new cases, up.

I don't see a lot of talk from Raleigh about the efflorescence of infection at meat-processing plants in Wilkes and Surry counties. It's a trend that's everywhere. By the last week in April (already!) there were at least seven other meat plants with at least 190 infected workers, but the state's Department of Health and Human Services was refusing to divulge the names and locations of those plants -- which really does nothing to dispel an impression of cover-up. On April 21, local health officials in Bladen County confirmed an outbreak at a Smithfield Foods pork plant, and the Bladen Journal reported outbreaks at food processing facilities in Robeson, Duplin, Lee, and Chatham counties. Some of those plants -- definitely the Tyson chicken plant in Wilkes -- employ prisoners on the line, and those slave laborers (is that too strong a characterization?) carry the infection back to their pods at night. Their guards and keepers carry the infection home to their families at night.

And such in the logic of highly infectious viruses, which would be jumping up and down at the thought of their coming new opportunities, if viruses thought at all.

The pandemic is putting pressure on Governors to earn their keep Some have gained dramatically in job performance approval, while others have dropped like Trump's stone-cold heart. This is Cooper's moment.