Tom Fetzer Has Left the UNC Board of Governors 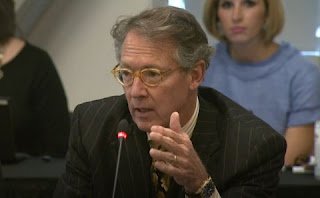 Not to put too fine a point on it, UNC BOG member Tom Fetzer got knifed yesterday by his fellow Republicans on the board. And not without cause.

Fetzer resigned his seat on the Board of Governors rather suddenly because he was probably going to be removed.

Fetzer, former mayor of Raleigh and former chair of the NCGOP, had been involved in every major rumble in the University of North Carolina system since Phil Berger and the Republicans in the NC Senate appointed him to the board. He was a prime mover in ditching system President Margaret Spellings. He proved himself a neo-Confederate over the Silent Sam controversy. He obtained and made public the video surveillance that led directly to the resignation of Chancellor Dan Gerlach at East Carolina University. He inserted himself into the chancellor search at Western Carolina Univ. and reportedly sought the job himself.

Joe Killian for NC Policy Watch got some of the scoop in this post by Rob Schofield.

Posted by J.W. Williamson at 5/21/2020 09:19:00 AM
Email ThisBlogThis!Share to TwitterShare to FacebookShare to Pinterest
Labels: Tom Fetzer, University of North Carolina