Your Weekend Update on ReOpenNC


Thankful for EQV Analytics (@AnalyticsEqv) for updating us on developments in the ReOpenNC movement, which we understand (really) as a surrogate re-elect Trump subset in the Republican/Libertarian universe, because -- let's get real here -- anyone wearing a mask must be an effing Democrat.

ReOpenNC leader Ashley Smith (not from Boone) has started a GoFundMe page: 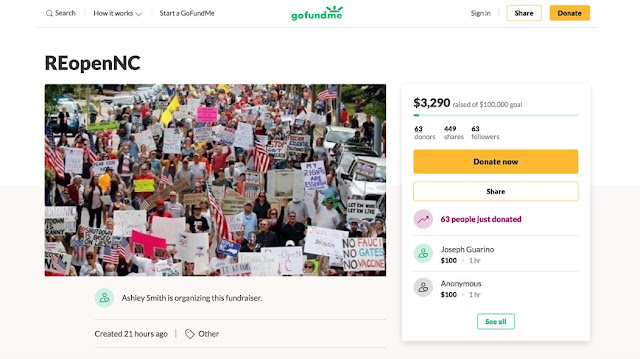 I became fixated on a protest sign clearly shown in the lower righthand corner of the photograph above. "NO FAUCI NO GATES NO VACCINE." I know who Fauci is, and I understand how he's offended the person who painted that sign: Fauci has occasionally contradicted Trumpolini. But "Gates"? Bill Gates? Oh, okay, because he secretly launched the whole virus to make money, and he and his wife Melinda have been publicly critical of Trumpolini's inept and bungled response to the pandemic.

But "NO VACCINE"??? It takes a graduate class in stupidity to advocate against finding a cure, but maybe it makes some sense if you believe -- along with the Trump of approximately two months ago -- that coronavirus is all a hoax. You can't vaccinate a hoax. Makes perfect sense now.

Back to not-from-Boone Ashley Smith. She's taking some heat on the ReOpenNC Facebook page over the loosey-goosey GoFundMe effort above. 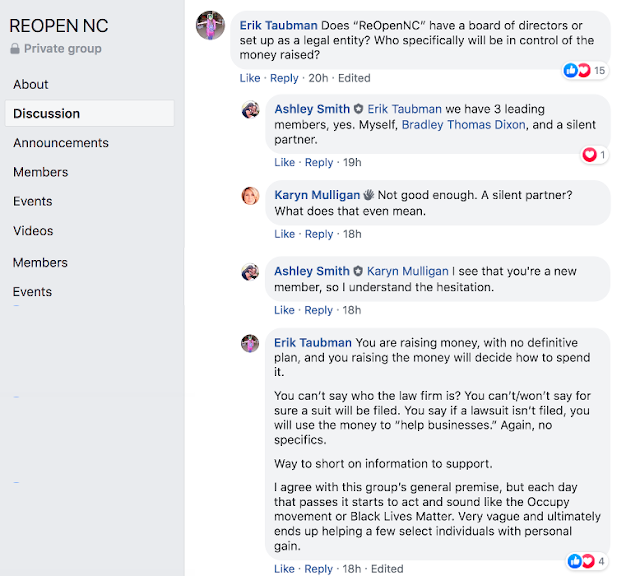 Posted by J.W. Williamson at 5/09/2020 08:50:00 AM
Email ThisBlogThis!Share to TwitterShare to FacebookShare to Pinterest
Labels: Ashley Smith, ReopenNC

I thought Rump already had about 2 billion in Oligarch money... I guess Ashley wants a cut.
JW is correct that ReOpen is just another lobe of Racism. So her lawyers are Silent Partners (Silent, Silent and Silent,Jr.)
No vaccine for her, just hurt immunity.