Why Is the Town of Boone Mirroring Trump's Mockery of Masks? 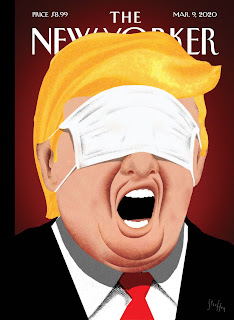 Way back on April 3rd, the Centers for Disease Control and Prevention announced new guidance for Americans, that they should wear face coverings in public to slow the spread of a deadly virus. President Trump himself made the announcement while also saying that he wouldn't be wearing a mask himself, lest it make him look weak.

Without a mask, he looks like a fool. Since yesterday morning, when it turned down a motion by Councilman Sam Furgiuele to require the wearing of masks for indoor shopping in Boone, so does the Boone Town Council. What with hundreds of summer people now poised to return from far-flung places, bringing their novel driving skills and their coughs with them. Meanwhile, there's ample video evidence from across the land that individuals who choose to follow the advice of the CDC and wear a mask in public have been verbally abused as "pussies" and "sheep." "Politically correct Democrats."

The Town of Boone caved on its 14-day quarantine order yesterday morning, and then voted 3-2 against requiring masks for people entering indoor establishments -- they had already required masks for workers in those establishments, who are now exposed to everyone else's lack of respect. The three votes against face coverings -- Nancy LaPlaca, Dustin Hicks, and Connie Ulmer. They want to think that people will do the right thing.

Attorney Nathan Miller, who brought the suit against Boone for the quarantine order, proclaimed that the state of North Carolina has "flattened the curve" and that strict measures are no longer needed. "Flattened the curve"? That's Trumpian happy talk. I think of that moment in the horror movie when the teenagers hiding in the closet confer and decide that the slasher has gone. So they open the door. You know what comes next.

The best that can be said about our "curve" -- it's fluttering, not flattening. Saturday we hit the highest one-day total for new infections. Yesterday the total was down, probably because of less testing during the holiday weekend. On Monday the state reported its highest number ever of people hospitalized for COVID. North Carolina has surpassed 800 deaths. More cases mean more hospitalizations. More hospitalizations mean inevitably more death, especially for those patients in an ICU.

Mixing in public without face coverings will inevitably mean more infections. How many ICU beds does Watauga Medical Center currently have available?

Posted by J.W. Williamson at 5/27/2020 09:38:00 AM
Email ThisBlogThis!Share to TwitterShare to FacebookShare to Pinterest
Labels: Donald Trump, health care, Town of Boone

I would have included this further evidence of the threat COVID still poses for NC, had I seen it in time: "The 15 counties with the highest COVID-19 infection rate are rural, and 18 of 20 counties with the highest COVID-19 death rates are also designated as rural." http://pulse.ncpolicywatch.org/2020/05/27/as-state-nears-25000-covid-19-cases-rural-nc-infection-rates-are-the-highest/