The People Trump Sees as Expendable 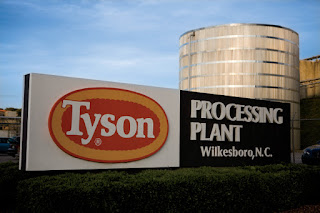 No surprise that there's a reported outbreak of COVID-19 at the Tyson chicken-processing plant in Wilkes County, the largest employer in the county. Winston-Salem Journal columnist Scott Sexton got the story by interviewing a Tyson worker who spilled the beans: the virus is "running wild" inside the plant. "As of April 23, Wilkes County was reporting just 13 positive cases. By Tuesday afternoon, the number had increased more than 10 times to 144," most of those new cases directly linked to the Tyson plant.

“It’s not safe,” James, the Tyson worker, said. “They tell us ‘Wear your mask you’ll be OK. You’re more likely to get it at the grocery store than here.’ I feel like they’re treating us as if we’re expendable.” (James is not his real name.)

According to Sexton's reporting, "Workers from the Wilkes County Health Department went Monday to three shifts at the Tyson complex to collect samples from 200 workers for testing. The remainder of the plant’s workers will be tested today through Saturday by Matrix Medical, a company hired by Tyson."

“It’s a scary situation,” James said. “Don’t nobody work there but poor white people and brown people. Black people, minorities. It feels like taking advantage of the little guy.”

Suck it up, James. Donald Trump has ordered meat factories to stay open. You're a cog in his wheel.

Posted by J.W. Williamson at 5/06/2020 10:39:00 AM
Email ThisBlogThis!Share to TwitterShare to FacebookShare to Pinterest
Labels: health care, Wilkes County

When I was a young worker the boss would always say,"You're free to leave," whenever I had a complaint. So I did.