When Your Own Children Can't Stand Your Morals 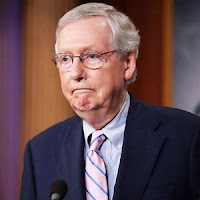 A must-read is Jane Mayer's new lengthy profile of Senate Majority Leader Mitch McConnell, the chief enabler of Trump in the US Congress. Like most New Yorker pieces, it's exhaustive -- but what else are we going to do in a Plague Year but read long pieces about a thoroughly despicable top Senate enabler of the worst president in history?

Intensely interesting factoids in the piece like this: McConnell's three daughters have completely deserted their father's politics:


McConnell also appears to have lost the political support of his three daughters. The youngest, Porter, is a progressive activist who is the campaign director for Take On Wall Street, a coalition of labor unions and nonprofit groups which advocates against the “predatory economic power” of “banks and billionaires.” One of its targets has been Stephen Schwarzman, the chairman and C.E.O. of the Blackstone Group, who, according to the Center for Responsive Politics, has, since 2016, donated nearly thirty million dollars to campaigns and super pacs aligned with McConnell. Last year, Take On Wall Street condemned Blackstone’s “detrimental behavior” and argued that the company’s campaign donations “cast a pall on candidates’ ethics.”

Porter McConnell has also publicly criticized the Senate’s confirmation of Justice Kavanaugh, which her father considers one of his greatest achievements. On Twitter, she accused Kavanaugh’s supporters of misogyny, and retweeted a post from StandWithBlaseyFord, a Web site supporting Christine Blasey Ford, one of Kavanaugh’s accusers. The husband of McConnell’s middle daughter, Claire, has also criticized Kavanaugh online, and McConnell’s eldest daughter, Eleanor, is a registered Democrat.

All three daughters declined to comment, as did their mother, Sherrill Redmon, whom McConnell divorced in 1980. After the marriage ended, Redmon, who holds a Ph.D. in philosophy, left Kentucky and took over a women’s-history archive at Smith College, in Massachusetts, where she collaborated with Gloria Steinem on the Voices of Feminism Oral History Project. In an e-mail, Steinem told me that Redmon rarely spoke about McConnell, and noted, “Despite Sherrill’s devotion to recording all of women’s lives, she didn’t talk about the earlier part of her own.” Steinem’s understanding was that McConnell’s political views had once been different. “I can only imagine how painful it must be to marry and have children with a democratic Jekyll and see him turn into a corrupt and authoritarian Hyde,” she wrote. (Redmon is evidently working on a tell-all memoir.)

McConnell's ex-wife's "tell-all memoir" will maybe make a good stocking-stuffer for next Christmas.

Posted by J.W. Williamson at 4/13/2020 09:31:00 AM
Email ThisBlogThis!Share to TwitterShare to FacebookShare to Pinterest
Labels: Mitch McConnell

Can't wait for that read!

I cannot wait for the Book as well!! Another number One best seller in tje making!

Hard pass on that book!