According to Jeffrey Billman and the Indy Week Primer, "Confirmed coronavirus cases in North Carolina are doubling about every 12 days—which, all things considered, is good news. When cases first started popping up in early March, they were doubling every two or three days. At this pace, we’ll clip 100,000 cases right around June 1—we’re a little under 7,000 now—but the important thing is that the pace of increase is slowing." 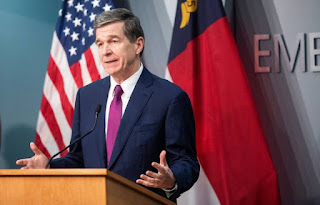 We hope that Governor Roy Cooper won't follow the weak waffling of governors to the south and west of North Carolina who are caving to pressure from Trumpists, who parade their loud opinion that the virus is a bunch of nothing. "Open us up!" they're screaming, and some governors are complying. Foolishly complying? Time will tell.

Tennessee Governor Bill Lee is allowing the “vast majority” of businesses in 89 of Tennessee’s 95 counties to reopen on May 1. South Carolina Governor Henry McMaster is reopening South Carolina beaches as of noon today, along with "non-essential" retail stores.

They're listening to people who literally don't know what they're screaming about or people who don't give a royal shit, and never have, about anything but their immediate wants. I'd prefer to listen to people who are deep into the science of a pandemic and who have spent some quality time examining the dynamics of this particular pandemic.

I’m talking to experts. I’m looking at the other pandemics I’ve covered. I’m talking to medical historians and making predictions based on data. And so I think a lot of people think that by May or June or August, we’re going to return to something like normalcy. But all the experts I talk to say, no, that’s a fantasy....

...if we all tried to come out at once, everything would look cool for about three weeks. And a week or two after that the emergency rooms would start to fill again, and people would start to die again. Flattening the curve is a notion that people love, but when we say we’re flattening the curve, no, we’re plateauing at a very high level of the curve. That means a steady rate of deaths. So what we want is to see the lockdown last until we get back down to close to what the normal baseline rate of deaths is....

It's going to be a long game of something Mcneil calls "the hammer and the dance" -- the "hammer" being lockdown and social isolation, followed by periods of "dancing" back out into public to tempt the virus to rage back. Historians keep pointing out that it was the second wave of the 2018 influenza pandemic that was the most deadly and devastating.

So let's hope Roy Cooper hangs tough with the ReOpenNC faction of the NC Republican Party.

Posted by J.W. Williamson at 4/21/2020 09:52:00 AM
Email ThisBlogThis!Share to TwitterShare to FacebookShare to Pinterest
Labels: health care, Roy Cooper

I find the astroturf foundations of the 'grassroots' protests the most interesting piece of the news.

No state can defend itself against Covid19 as long as neighboring (or any) state opens up and takes chances before the first wave subsides. People still have freedom of movement. Testing and statistical analysis are also rendered impossible when states are not in sync.
Trump seems bent on sabotaging any infection control measures. He expects to bankrupt and collapse state efforts, maybe so he can flush state governments down the toilet (He claims to flush 10 or 15 times.). States cannot run a deficit budget like the Federal Government. Most cannot afford to test as they should, contact trace, or get supplies. Only united mobilized federalism can do the job.
More and more I'm convinced Trump and followers want to derail the November elections.

What people forget is that "the Economy" is not there to be reopened. The global debt bubble has been pierced so that the large business entities and speculations in which much electronic borrowing was done and then off-shored and stashed without being invested in use value resulted in the inability to repay (inevitable defaults). At the same time petro states (Saudis, Russians, Americans) desperate for cash refused to lower production so the price of oil crashed just as demand was falling. The pandemic was icing on the Depression cake. The other two things had been poised to occur for a long while with central banks extending and juggling credit. Zero interest rates only accelerated borrowing and make a Black Hole implosion worse. In fact, holes are still being chopped in the bottom of the credit boat in an effort to drain the "underwater". That's what is meant by crony capitalism (markets and Capitalism are two different things). They can't make a sound production/distribution network by sucking Peter to please Paul. There has to be use value (the basics for people) to make trade viable. So even if businesses try to run the tires are flat now, and a surge in outbreaks is likely to necessitate another round of even tighter shutdown anyway. The inferno of herding immunity would also further collapse economic activity. The demand is just not strong enough for any bounce-back. People mostly are already behind on rent and bills after one month of idleness. They're not gonna be able to whip out an unpaid credit card and $1200 was gone before
sunrise. Opening the tattoo parlor as salvation is something they'd like us to believe, and not actually possible. If you go get an ink job now you'll be stamped for life with a negative net worth.