We Must Be Thankful for Roy Cooper 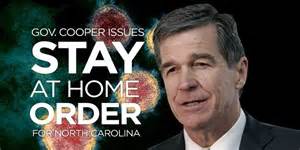 Seeing other Southern governors in action (rather, inaction), we can be thankful that NC Governor Roy Cooper has been proactive in shutting down social interaction to prevent the spread of COVID-19. I can only imagine what shape we'd be in if Pat McCrory had won reelection, that pathetically weak toe-stepper, or God help us! if Dan Forest were sitting in that chair.

The example of governors south of us has been hair-raising. This intercepted Facebook post from a Georgia reporter will bring you up to date on why the South gets stereotyped as dumber than a 2-dollar dog:


The governor of Georgia [Brian Kemp] said he did not know asymptomatic people could carry and transmit the virus unawares until yesterday [April Fool's Day]. One public health official said simply “what rock has he been under?” It would be nice to say that Kemp is governor of Georgia by virtue of his cornering the bless-his-heart vote, as in “Bless his heart, he’s so stupid that, if we don’t elect him governor, he never could get a real job.” But it’s worse than that. But whatever it is, there is a pandemic of it among Southern governors. DeSantis in Florida said pretty much the same thing yesterday after earlier virtually ordering churches and synagogues to keep having services as usual. Kay Ivey in Alabama, explaining why she’s so stupid, said something so much stupider to illuminate us on why she wouldn’t get real that I don’t even know what it means: “Y'all, we are not Louisiana, we are not New York State, we are not California. Right now is not the time to order people to shelter in place.” And they’re all leading their people to a hell of a time by letting them continue to debate such issues of whether this panic is going to adversely affect whether Nick Sabin should have Crimson Tide spring football practice.

Kemp’s motivation for dillydallying was to get back in Low T’s good graces ["Low T" is his nickname for Trump] after not appointing Trump’s Duke of Buttkissing Doug Collins to an open US Senate seat. [Kemp instead appointed Kelly Loeffler to the seat, who recently got implicated for selling off millions in stocks because she had inside info on how bad the pandemic was going to get.] It worked to some extent as Low T twisted himself in knots today trying not to answer a question about how badly our dipwad governor put our state in the weeds. As one put it, an “insane aversion” to reality.

Posted by J.W. Williamson at 4/03/2020 08:36:00 AM
Email ThisBlogThis!Share to TwitterShare to FacebookShare to Pinterest
Labels: Roy Cooper