Mark Meadows Took His Hatchet to the White House


We would expect little else from the congressman from North Carolina, who loved shutting down the government to get his way. 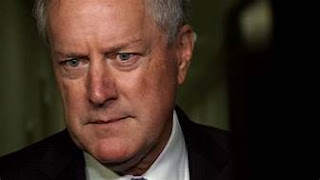 Mark Meadows, newly installed as Trump's fourth chief of staff, is reportedly increasing tensions in the White House, which should come as no surprise to anyone who has followed his career as congressman from the NC-11. We learn, for example, from this Bloomberg reporting that it was Meadows who fired press secretary Stephanie Grisham:


Meadows’s moves -- especially Grisham’s replacement, which she and her staff learned was under consideration in a report last week by Axios -- have suddenly dialed up tension in a building that has long been riven by infighting, according to multiple people familiar with the situation.

Meadows told Grisham over the weekend he wanted her to give up the press secretary position and serve only as the White House communications director. She declined, according to two people familiar with the matter.

Grisham has a powerful advocate in the White House: first lady Melania Trump, who promptly brought the ousted press secretary back to the East Wing as her personal chief of staff. The only formal announcement about the staff changes on Tuesday came from the first lady’s office, which some of the people suggested was a sign of her displeasure.

Have his district's republicans forgiven him for his last minute swindle of his congressional seat?

Let's call him and ask if he can send App regional Healthcare some alcohol.